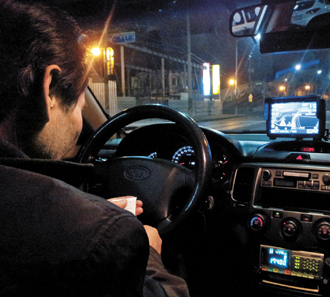 A “24-hour” Incheon cab driver surnamed Lee, 67, picks up a passenger in Yeonsu District, Incheon. Lee drives over 17 hours a day and sleeps only three to four hours a night, one of many taxi drivers who work a double shift in order to stay competitive in the business. By Choi Jong-hyeok

A 24-hour shift is becoming more and more common for cab drivers who find extending their time on the road the only way to make ends meet, while taxi companies save money by not hiring an additional driver - despite the risks involved in driving without proper rest.

A 47-year-old cab driver surnamed Kim from a Seoul taxi company recently began driving “24 hours” again after a brief hiatus. After Kim became hospitalized for shingles as a result of driving 17 hours a day, he switched to part-time shifts. But finding it difficult to make a living with the reduced hours, he reverted back to the longer shifts.

“Past midnight, it’s difficult to fight against sleepiness, and there are times that I doze off [while driving],” Kim said.

Another cab driver, who runs a 24-hour cab contracted with an Incheon taxi company, surnamed Lee, 67, said, “For six years I drove for an average of 17-18 hours per day.” Taking out meal times and sleep time for two or three hours, he spent the whole day driving.

He stated, “There is no choice but to work 24-hour days in order to earn money quickly.” In the case of his Incheon-based taxi company, of its 150 cabs, 100 of them operate 24-hour days. A JoongAng Ilbo reporter went around Incheon’s major subway stations and bus terminals, including Juan Station Monday night, but barely saw any cab drivers switch shifts.

Generally, taxi companies have two drivers for one cab who switch over after 12-hour shifts, but with the decrease in the number of cab drivers, some cab drivers double their shifts under the condition that they hand over earnings from both shifts to the company. The companies technically still get cuts from both shifts while the driver has the whole day to pick up passengers.

Lee Sang-woo, the secretary general of the taxi division of the Korean Public and Social Services and Transportation Workers’ Union, stated, “From the perspective of a business operator, ‘24-hour taxis’ are a golden opportunity that requires less fixed costs, such as insurance and wages, for at least 1.5 times the cut [from the driver]. Although it is dangerous, it is difficult to resist the temptation of quick profit, and in the case [drivers] refuse, [they] may be fired, so it’s an atmosphere that everybody has to drive all day long.”

The main problem is that with cab drivers pulling 24-hour shifts, the risk of accidents increases. As the cab drivers generally scrape together two to three hours of sleep a night and work more than 17 hours seated stationary in a confined space, their health can deteriorate and accidents are more likely to happen as their concentration level drops off due to exhaustion. But in order to be able to pay the commissions to their companies, these cab drivers, like Kim and Lee, continue to push themselves.

A Gyeyang District police officer from Incheon said, “The number of taxi accidents due to the cab driver’s loss of concentration from exhaustion is consistently increasing.”

Despite such dangers associated with 24-hour cab driving, there is yet to be a government regulation preventing it. A Seoul Metropolitan Government transportation official stated, “Because there is no law that regulates 24-hour taxis, it is difficult to crack down on companies that operate 24-hour cabs for many reasons, including the supply and demand of drivers.”

Meanwhile, a Seoul National University professor of the Department of Civil and Environmental Engineering stated, “Roads are a public space on which citizens’ safety depends” and that “The current policy of allowing 24-hour taxis is outdated.”

He further stated, “At least taking into consideration breaks and holidays, a policy of having 2.5 to 2.8 cab drivers for one cab should be considered.”