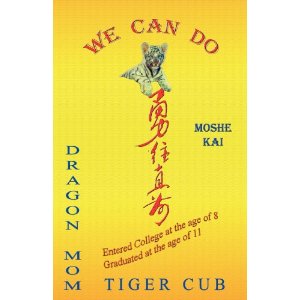 LOS ANGELES - The one thing 14-year-old Moshe Kai Cavalin dislikes is being called a genius.

All he did, after all, was enroll in college at age 8 and earn his first of two Associate of Arts degrees from East Los Angeles Community College in 2009 at age 11, graduating with a perfect 4.0 grade point average.

Now, at 14, he’s poised to graduate from UCLA this year. He’s also just published an English edition of his first book, “We Can Do.”

The 100-page guideline explains how other young people can accomplish what Cavalin did through such simple acts as keeping themselves focused and approaching everything with total commitment. He’s hoping it will show people there’s no genius involved, just hard work.

“That’s always the question that bothers me,” Cavalin, who turned 14 on Tuesday, says when the G-word is raised, “People need to know you don’t really need to be a genius. You just have to work hard and you can accomplish anything.”

And maybe cut out some of the TV.

Although he’s a big fan of Jackie Chan movies, Cavalin says he limits his television time to four hours a week.

Not that he lacks for recreational activities or feels that his parents pressured him into studying constantly. He writes in “We Can Do” of learning to scuba dive, and he loves soccer and martial arts. He used to participate in the latter sport when he was younger, winning trophies for his age group, until his UCLA studies and writing made things a little too hectic.

Indeed, one of the key messages of his book is to stay focused and to not take on any endeavor halfheartedly.

“I was able to reach the stars, but others can reach the Milky Way,” he tells readers.

It was a professor at his first institution of higher learning, East Los Angeles City College, who inspired him, Cavalin says. He didn’t like the subject but managed to get an A in it anyway, by applying himself and seeing how enthusiastic his teacher, Richard Avila, was about the subject.

Avila, he says, inspired him to write a book explaining his methods for success so he could motivate others.

It took four years to finish, in part because Cavalin, whose mother is Chinese, decided to publish it in Mandarin, and doing the translation himself was laborious.

Han Shian Culture Publishing of Taiwan put the book in print, and it did well in Taiwan, Singapore and Malaysia, as well as in Southern California’s Asian communities. He then brought it out in English for the U.S. market.

Because of his heavy study load, Cavalin has had little opportunity to promote the book, other than a signing at UCLA, where he lives in student housing with his parents and attends the school on a scholarship.

After earning his bachelor’s degree, the math major plans to enroll in graduate school with the hopes of earning a degree. After that, he’s not so sure. He points out he’s still barely a teenager.

“Who knows?” he says, chuckling at the thought of what lies ahead in adulthood, “That’s a very distant future, and I’m pretty much planning for just the next few years. That’s too far into the future for me to see.” AP