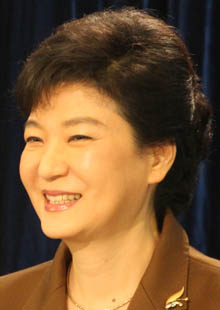 To mark a sharp contrast between the current Lee Myung-bak administration and the Saenuri Party before the April 11 legislative elections, Park Geun-hye, the ruling party’s interim head, stressed yesterday that she will revive a scrapped project to build a new airport in southeastern region.

Park made the remarks on a live TV debate yesterday hosted by the Korea Broadcasting Journalists Club. The 60-minute discussion between the panel and Park addressed a series of pending issues and was aired live by six broadcasters including KBS, MBC and SBS.

During the debate, Park did not hesitate to attack the liberals for their flip-flop attitude toward major policies pursued during the Roh Moo-hyun administration, particularly the Korea-U.S. free trade deal. She also tried to keep her distance from the Lee administration to establish a new image for the Saenuri Party.

“We are in the process of rebirth,” she said. “We are carrying out drastic reforms to completely sever ties with past wrongs and to be reborn.”

She said severing ties with the past doesn’t necessarily mean President Lee’s departure from the Saenuri Party, saying that the ruling party will pursue new and different policies rather than bidding an “artificial farewell” to the Lee administration.

During the debate, Park stressed firmly that the Saenuri Party will bring new life to the broken promise to build a new airport in the country’s southern region.

“The new airport plan was completely scrapped by the Lee administration,” Park said. “But I think it is a crucial part of the infrastructure and will improve the nation’s competitiveness.”

In April 2011, President Lee reneged on his 2007 campaign pledge to have a new international airport built in the southeastern region and made an official apology to the nation for having failed to keep his promise.

At the time, he said he could not irresponsibly push forward a project destined to lose money for his own political gain. Park said yesterday that the priority for the Saenuri Party at this point is to win the national consensus, warning against the possible beginning of another undesirable fight to win the project.

“What I can promise now is that I will push forward the new airport project at all costs,” Park said. “And the site selection will be fair and objective.”

Park, known for her reserved political style, made unusually fierce attacks against the liberal opposition parties.

“They were already judged by the people and they even admitted that their failures were too severe to allow their successors another chance,” Park said, referring to the end of liberal rule after the Roh loyalists’ 2007 presidential defeat.

“But they gathered again and they keep changing their words about the policies that they had pushed forward during the Roh administration. And I think that’s what should be judged.”

She also said it is necessary to end the practice of saying one thing when the party is the ruling party and another when it is the opposition party. “We, the Saenuri Party, are determined to correct this political practice,” she said.

Park said the Korea-U.S. free trade agreement was first initiated by the Roh administration, and she thought it was beneficial to the country at the time and her thoughts remained unchanged now.

“When the FTA goes into effect the effectiveness will be seen in real life, and many people will support it,” she said.

Asked about a possible alliance with Ahn Cheol-soo, a prominent liberal presidential contender, Park said “I think it will be great if we can work together.”

She said, though, that the future was still unknown when asked if she would actively pursue the alliance.

Park was slightly more definite about the need to unite the conservatives in Korea.

“I think we can work together when we seek the same values and direction,” she said. “I think it is desirable to have unity, but the specific methods or time line still need more discussion, so I cannot say clearly at this point what will happen.”

She also rejected concerns that the party’s nomination reform will split the conservatives if the nominees that are cast aside decide to leave the Saenuri Party.

“When we make nominations based on principles and standards to meet the public’s expectations, I don’t think there is a possibility [of a split among the conservatives],” Park said.