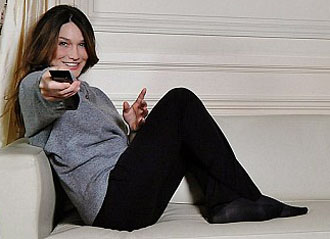 PARIS - As Nicolas Sarkozy strives in his re-election campaign to shed a flashy image and rebrand himself as president of the people, France’s glamorous first lady Carla Bruni seems to be undergoing a reverse makeover to appear a little more ordinary.

A head-turning former supermodel and singer who posed nude and dated rock stars before her romance with the newly elected Sarkozy in 2007, Bruni dazzled in designer garb and stylish hairdos in her early years as the president’s third wife.

Appearing for the first time at a campaign rally Sunday, the 44-year-old looked deliberately understated in a dour jacket and trousers with minimal makeup.

Even more startling was the Italian-born heiress’s appearance on the cover of a lowbrow TV listings magazine last week, curled up on a sofa in a dowdy grey sweater, comfy trousers and socks, raving about the shows she likes to watch.

A world away from a glossy 2008 photo shoot for Vanity Fair, in which she posed on the roof of the presidential palace in a strapless blood-red ballgown, Bruni played first housewife as she talked about watching reality shows while cuddling her four-month-old baby, Giulia.

She appeared the same day in “20 Minutes,” a free daily paper handed out in underground stations. Wearing a chunky brown cardigan, no makeup and her hair ungroomed, Bruni said she would be 100 percent at Sarkozy’s side in the campaign.

Her new look comes as Sarkozy is battling to overturn an image set early in his term of being too flashy and too drawn to the company of rich businessmen, in contrast to past presidents who had simpler tastes more in tune with rural France.

Paparazzi followed every step of his whirlwind courtship of the eye-catching Bruni in late 2007, horrifying many in France.

“The celebrity couple image did a lot of damage by upsetting his traditional conservative base,” said University of Lorraine political scientist Arnaud Mercier. “Sarkozy wants to correct that by portraying them as ordinary, but the ‘bling-bling’ image is so firmly rooted that people may not be convinced.”

Opinion polls show two-thirds of respondents have a negative opinion of Sarkozy, and he lags Socialist Francois Hollande - a self-styled “Mr. Normal” - in polls for the two-round election on April 22 and May 6. Reuters