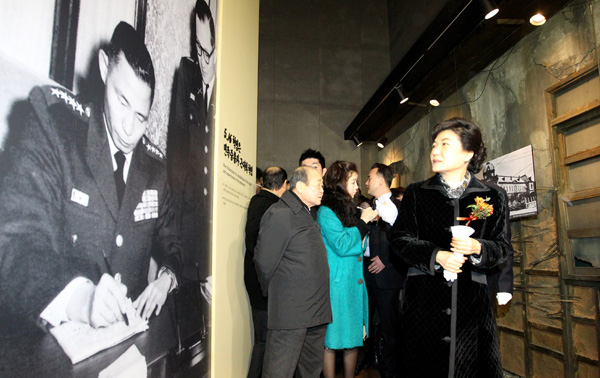 Park Geun-hye, above right, interim leader of the ruling Saenuri Party and daughter of the late President Park Chung Hee, tours the exhibition hall dedicated to her father yesterday after the opening ceremony for the Park Chung Hee Memorial-Library in Sangam-dong, northwestern Seoul. The late president, above left, seized power in a military coup in 1961 and ruled the country for 16 years until 1979, when he was assassinated by his top intelligence aide. Park is largely credited with industrializing Korea.[NEWSIS]

Meanwhile, members of a civic group, right, demonstrate against the memorial for the elder Park, who they say collaborated with imperial Japan and ruled Korea as a dictator who suffocated democracy. By Park Ji-hye