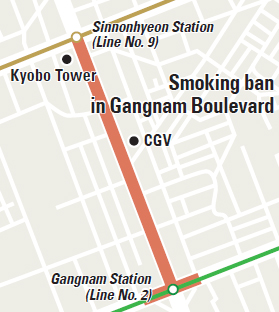 The Seoul Metropolitan Government said yesterday it has designated a thoroughfare with heavy pedestrian traffic in an upscale area as a no-smoking zone.

According to the city government, the 934-meter-long (1,021 yards) Gangnam Boulevard in southern Seoul, the area between exit No. 2 of Gangnam Subway Station line No. 2 and exit No. 5 of Sinnonhyeon Station of line No. 9, has been designated as a 24-hour smoke-free zone. It said that the new policy will have a three-month grace period from April and go into effect in July.

However the rules that will be implemented on Gangnam Boulevard are different, especially for the penalty issue. It said that violators will be subject to a fine of 50,000 won ($45) if they smoke within the area that is being managed by Seocho District Office, area between exit No. 9 of Gangnam Subway Station of line No. 2 and exit No. 6 of Sinnonhyeon Subway Station of line No. 9.

The Seocho office said that it will have a grace period from March to May and the fine will be imposed from June.

In December, the city government also has enforced a smoking ban at all 339 city bus stops serving bus-only lanes, where passengers catch the bus from the median, in the city. The new regulation goes into effect March 1 as its three-month grace period ends this month. Violators face fines of 100,000 won. The bus stops located on sides of streets are not included as no smoking zones. The city government said it will designate about 21 percent of the city as smoke-free zones by the end of 2014.