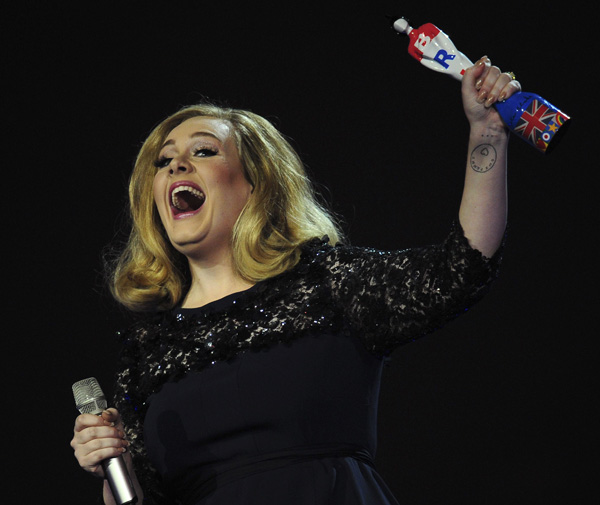 
LONDON - Soulful songstress Adele capped a momentous year of Grammy Awards triumph and medical woes with a double win at the U.K.’s Brit music awards Tuesday, taking prizes for album of the year and best British female solo artist before making an obscene gesture after the show’s host cut her acceptance speech short.

It has been a dramatic year for down-to-earth north London diva Adele, who based her chart-topping songs of heartbreak on a rocky relationship.

Her sophomore album “21’’ won six Grammys last week and has sold more than six million copies in the United States alone. But Adele also had to undergo vocal cord surgery in November to fix a potentially career-threatening throat condition.

She delivered a powerhouse performance of her single “Rolling in the Deep’’ to thousands of fans and industry insiders at London’s O2 arena.

“It’s been an amazing year,’’ Adele said as she received the female artist statuette from petite pop star Kylie Minogue.

“I feel like a drag queen next to you,’’ joked the winner, who wore a sleek black Burberry gown but towered over Minogue. She thanked her record company “for letting me be the kind of artist I want to be.’’

She stressed afterward that it was aimed at industry leaders, not her fans.

“I’m sorry if I offended anyone but it was the suits that offended me,’’ Adele said.