For deaf Starbucks barista, it’s all in the signs

For deaf Starbucks barista, it’s all in the signs 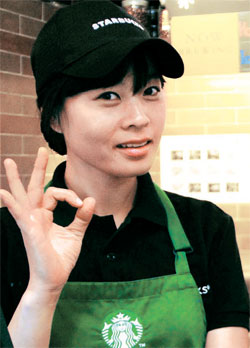 Although a Starbucks branch in Seocho-dong, southern Seoul, was bustling with coffee lovers at around noon on Monday, employees worked in silence.

Most baristas at Starbucks franchises receive orders from the cashiers verbally, with shouts of machiatto, mochachino and latte echoing throughout the store.

But Hwang Jin, a 33-year-old deaf barista, receives her orders via hand gestures. Employees give a thumbs-up to signal an Americano and make a “G” sign to confirm it’s a grande.

“When making foam with milk, those who are hearing-impaired rely on the sensation in their hand when frothing the milk instead of the sound,” barista instructor Sung Jeong-min said. “They are more sensitive to the vibrations of the milk steamer and produce a smoother taste in the coffee.”

Hwang, who lost her hearing after health complications as a 4-year-old, has worked at the Seoul National University of Education Starbucks branch since November 2011.

After she graduated from high school, Hwang married and had two children, living at home and taking care of the family. But last year, she heard that Starbucks along with the Korea Employment Agency for the Disabled was looking to employ people with disabilities.

She was one of the 25 percent of disabled applicants to be recruited. Hwang received training for three weeks and was then assigned to the store.

“Most places do not hire disabled people unless its a simple manual labor job, but here, I am happy to be able to mingle with other people,” Hwang said.

Though many of her co-workers were very understanding, Hwang said she felt very anxious when starting to work at the coffee shop. One time, she served a customer who ordered a green tea latte a cup of Americano coffee instead. Hwang said she felt that she had been a hindrance to the customer and also put her fellow employees in an awkward position.

“Thinking that I inconvenienced many people again, that they would think ‘because she’s disabled, it can’t be helped,’ I shed tears,” Hwang said.

The first to learn sign language at the Starbucks branch was the store manager, Jung Cheon-won, 38.

“At first, we tried to communicate by writing on a piece of paper but it was too much of a hassle, and I began to learn sign language,” Jung said.

Hwang’s co-workers were so keen to learn sign language that they are now at an advanced level.

Another employee of the Seocho Starbucks brach, 22-year-old Park Eun-sil, said, “When I express worries that I can’t express in words through sign language, my heart feels at ease.”

The store also plans on having signs and guides so that customers can order in sign language. Starbucks Korea has 3,700 employees and of them 51 are with disabilities.

“We are reviewing a plan to have a disabled employee at each of our 400 branches nationwide,” a Starbucks Korea spokesperson said. They are “following the U.S. headquarters’ management policy of hiring employees regardless of race or any disabilities.”

“Hearing-impaired people fear talking with people and flock to jobs where they can work alone,” Jung said. “For disabled people to display their true talents, society has to approach them first.”