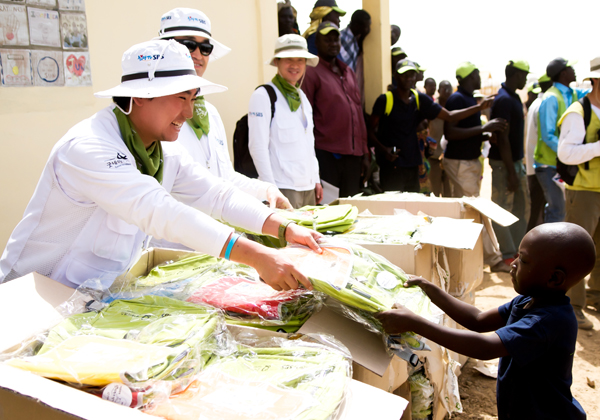 Popular Korean singer Lee Seung-chul hands out new backpacks to children of a village in Chad, central Africa, on Feb. 11 in front of the first branch of the new school he has founded. The inaugural ceremony of Lee and Chad School, named after the singer, was held on that day, and the school is the first of ten that Lee intends to establish in Africa. Provided by Good Neighbors

In rural Dogore, in the central African country of Chad, a white cloth covering a building was removed to reveal the new Lee and Chad School which opened on Feb. 11.

The school, painted in bright yellow, was established by 45-year-old Korean singer Lee Seung-chul. The singer plans to establish 10 schools in Africa over the course of a decade. This is his first one.

Lee, along with medical volunteers and his wife Park Hyun-jeong, 47, embarked on a trip to Chad for four days and three nights to attend the inauguration of the school and to look for a site for a second branch of Lee and Chad.

The philanthropic crooner was inspired when he watched a documentary showing deceased actor Park Yong-hwa (1977-2010) breaking ground by establishing a school in Chad. Lee first visited Chad in March 2011.

In an effort to help alleviate the impoverished conditions, Lee took the initiative to make a difference. In Chad, 69 percent of the population lives off less than one dollar a day and 75 percent of the children are malnourished.

In September of last year, Lee announced his project, called “Ending Poverty,” to build one school per year in Africa for the next 10 years and also provide a health center to accompany the school. Lee was shocked during his visit last year when he found locals drinking muddy water and spent 30 million won ($26,600) to install automatic pipes. This time around, he was able to see clean drinking water from the wells and women washing dishes while chatting in the village.

Before Lee, the nearest school was a mud hut on the verge of collapsing, and for many children of the village, the school was too far from home to attend. Lee’s new school is built of concrete.

The 64-year-old head of the village expressed, “Since 1948, I have never seen something like a school in this place.”

At the school’s inaugural ceremony, Lee said to the village’s 700 residents, “This school is now all of yours. I wish that this place will produce great leaders who can guide Chad.”

After the ceremony, they feasted in the classrooms on rice and braised lamb prepared by the villagers. The children received backpacks as presents, and Lee also held a singing lesson for them. One boy approached the singer and said bashfully, “I will like to express my thanks to Mr. Lee.”

Lee donated 200 million won of proceeds from his album sales last year for the school.

With 400-500 million won in donations from relief organization Good Neighbors and contributions from an SBS documentary on the project, a community center with additional classrooms, a health center and a kitchen will be built next to the school.

Last year, Lee brought 8-year-old Kadiza Abakar to Korea to treat a growth on her eyes that almost lead to blindness. Abakar’s minor eye condition had worsened because her mother, who was uneducated, left it untreated. Thus, Lee, understanding the value of education, took the initiative to donate money to Good Neighbors to start construction of a school in her hometown. Abakar is much better off now.

Park Geun-seon, 42, manager of the Good Neighbors chapter in Chad who spent the past 11 years working in the country, said, “Lee brought hope to this place.”

“We can build the school. But the tuition of $20 per year cannot be afforded by the residents. Children sponsorship is necessary,” Lee said.