Stony monument to a victorious king

Stony monument to a victorious king 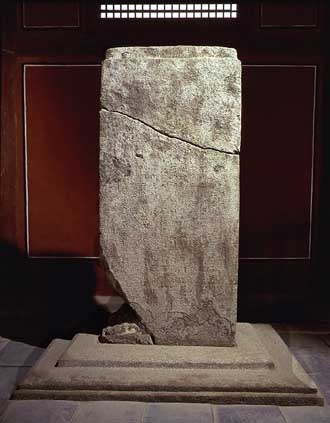 This monument commemorating the inspection of Mount Bukhan by King Jinheung is one of the sunsubi (monument commemorating territorial expansion) built in honor of the tours of King Jinheung (540-575) in the Silla Dynasty. It marks the king’s expansion to the Han River valley and his subsequent tour of the region. For almost 1,200 years, it was thought to be a monument to the Venerable Muhak (1327-1405), a Buddhist monk, until calligrapher Kim Jeong-hui decoded the text on the monument in 1816. The text gives historical evidence of King Jinheung’s reign.

The monument was moved its original location on Mount Bukhan to Gyeongbok Palace, central Seoul, in 1972, to protect it from the elements. It is currently housed at the National Museum.