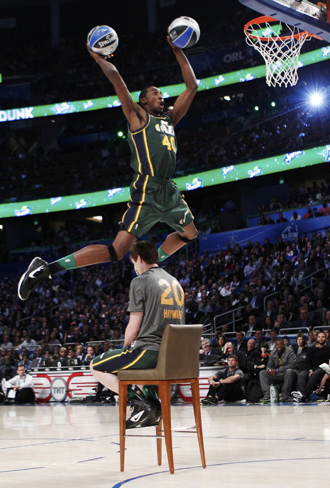 ORLANDO, Florida - Late replacement Jeremy Evans of Utah won the Slam Dunk Contest on Saturday, highlight of the festivities on the eve of the NBA All-Star game.

Evans, who entered the competition in place of injured New York Knicks guard Iman Shumpert, received 29 percent of the three million votes cast by fans via text message, Twitter and the Internet.

His three dunks included an entertaining double dunk, executed as he sailed over a helper seated in front of the basket who tossed him two balls simultaneously.

For his first dunk, Evans wore a small video camera on his headband, the replay giving fans a bird’s eye view of the slam.

In the last round, he offered a tribute to former Jazz great Karl “The Mailman” Malone - donning a Malone jersey then dunking over comedian Kevin Hart - who had “delivered” the jersey to the court dressed as a postman.

“It’s just amazing to come out here to give the fans what they want,” said Evans, a reserve forward for the Jazz.

The Slam Dunk Contest was the finale of All-Star Saturday Night - curtain-raiser to Sunday’s All-Star exhibition between the Eastern and Western conference teams.

Love, who is averaging 25 points and more than 9 rebounds a game for the Timberwolves, won a tiebreaker to advance from the first round then out-shot Durant in the final round connecting on eight of nine attempts in one span.

“It was a lot of fun,” said Love, who was tied for third after the opening round and beat Miami’s Mario Chalmers in a tiebreaker to advance along with defending champion James Jones and Durant.

Love and Durant made 16 in the second round as Jones connected on 12 and was eliminated.

A dominant force inside, Love admitted that the idea that a player at his position should not go for three-pointers had motivated him to perfect the shot.

“I always knew I could shoot it, and I didn’t think I had to stop just because of my size or the position I played,” he said.

San Antonio point guard Tony Parker of France won the Skills Competition - in which players compete against the clock on an obstacle course set out on court to test their dribbling, passing and shooting skills.

Parker was the only one of six contestants under 30 seconds in the first round, with a time of 29.2 seconds. AFP