Hong, a 51-year-old white-color employee, bought a German sport utility vehicle a few years ago, rear-ended the car in front three months later and got quoted 45 million won ($39,920) by the official service center to repair his mangled front bumper.

Instead of fixing the damage at an astronomical cost, he bought a new midsize diesel sedan from the same brand. Then a gas station employee accidently filled his tank with gasoline, and reassured him that it would only cost a few million won to repair. As it turned out, the damage to his wallet was far greater: 15 million won. Adding insult to financial injury, the repairs took one month. Fortunately for Hong on this occasion, his insurance covered it.

Last year, over 100,000 imported cars were sold in Korea for the first time, taking the total in the country beyond 600,000. In January, imports accounted for just over 10 percent of the nation’s auto sales, also setting a new precedent.

As such, imported cars are finally being considered mainstream. However, buyers are worried about the massive repair costs.

Many people are reluctant to purchase foreign cars because the repairs can end up costing more than they paid for the vehicle itself.

For some luxury cars, just changing the oil can cost 500,000 won, while something as trivial as refilling the washer fluid sets them back 50,000 won. 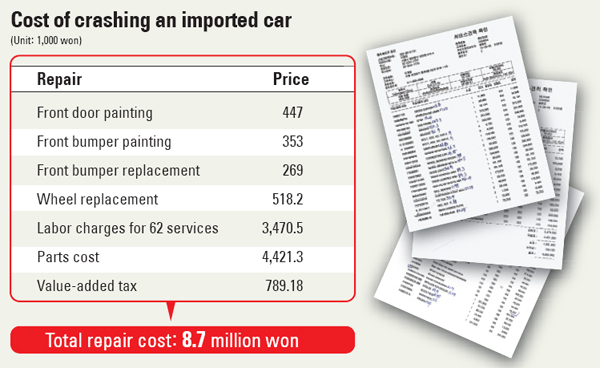 According to information released by the Korea Insurance Development Institute in December, repairs for a minor collision in a parking lot cost the owner of an imported vehicle 5.3 times more on average than if they had been driving a domestic car.

The institute compared three foreign cars with three domestically made vehicles and found that the same level of damage yielded average repair bills of 14.6 million won and 2.8 million won, respectively.

In another recent anecdote, the owner of a Korean-brand city car had a minor bump with an imported luxury car that cost hundreds of millions of won. Repairs for the latter, which needed a new rear door due to extensive scratches, cost 13.9 million won and took 22 days.

In total, the small car owner’s insurance company had to fork out 18.8 million won, including the cost of providing a temporary rental car to the other party.

Industry observers say there are problems with the structure of repair costs and car prices in Korea.

“Beginning a few years ago, competition in the market for imported cars began heating up, and the prices of new foreign cars dropped significantly to a more attractive level,” said Kim Pil-soo, a professor at Daelim University College. “So now importers are trying to reclaim some of these lost profits from repair services and components.”

“Foreign parts are overpriced, even taking into consideration that they have to be imported,” he said. “The carmakers could order them from Korean companies [and save money], but they don’t.”

“It doesn’t make sense that labor charges for repairs are three times higher for foreign vehicles,” he said “One of the problems is that importers do not share information on the pricing structure of components and repair services.”

Staff at a private repair shop in southern Seoul, which specializes in fixing foreign vehicles, said that most of their customers want to have their cars fixed at a lower cost by repairing rather than replacing the damaged parts.

Official service centers often recommend that entire bumpers or doors be replaced, but Lee Ui-pyo, 39, who owns the repair shop, said he tries to repair them. Meanwhile, paint jobs at official centers cost around 700,000 won to 800,000 won, but he claims he can do the same job for half the price - indicating the unfair profit margin at the former, he said.

Some employees at dealerships that sell imported cars said they recommend their customers head to private repair shops to save money.

“If parts need to be replaced, I purchase them from the headquarters and take the customers to the repair shops,” said one employee.

In response to the criticism, importers say they are being judged unfairly.

“Our technicians advance from junior, first senior, second senior to master [at a training academy in Suwon] and they have to study vigorously to do what they do,” said Yeo Hun-dong, a manager at a service center run by Kolon Motors, an official dealer of BMW.

“There could be safety issues if these services are carried out by private repair shops,” he said. “That is why we have official service centers, to prevent potential damage arising from poor service.”

Kim Seong-tae, a manager at a service center in Bangbae-dong, southern Seoul, said, “We not only have the best equipment, but also provide top-of-the-class service. Other private shops buy fake components from China or Taiwan, but it is hard to tell the difference just by looking at them.”

He said the Fair Trade Commission is now investigating the price of components and repair costs charged by importers to protect consumers. It is also probing whether there is a bubble building in imported car prices.