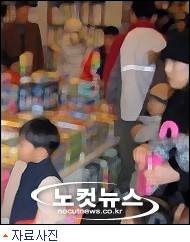 Starting today, 15,000 private day care facilities around the nation are slated to go on strike for a week to pressure the government to increase the child care subsidy, throwing working parents into a state of panic.

The Ministry of Health and Welfare announced yesterday that private day care centers nationwide under the Korea Edu-care Association would close from today until March 2.

There are almost 75,000 children under the care of these facilities.

Parents are criticizing both government and the day care centers for the sudden decision, which could leave them in an extremely difficult position should the facilities be shut down for the week.

One frustrated mother, Lee Mi-hwa, wrote on Daum’s Agora Web site, “If you do something like this so suddenly, what can we parents do? Though improved treatment is important, it’s not right to hold children as hostages.

“It’s driving me crazy to think I’m going to have to pay more money to a neighbor to take care of my child for a week.”

Starting in March, kindergartens and day care centers will receive 200,000 won per child as a part of a new Ministry of Health and Welfare policy that aims to expand educational resources for five-year-olds. The new policy will also require greater regulation of the student activity fees that day care facilities collect from parents.

Under a separate policy by the Ministry of Education, Science and Technology that has further inflamed the day care centers, kindergartens will receive an additional 50,000 won to 100,000 won starting in March.

The private day care centers under the Korea Edu-care Association said they are also upset that the 200,000 won subsidy “does not cover the 284,000 won the government had said would be the average educational fee for five-year-olds.”

Meanwhile, the Health Ministry said it has encouraged individual day care centers not to participate in the strike in order to minimize the impact on both parents and children.

Day care centers that do participate in the week-long strike could be in violation of child care regulations that require them to operate for 12 hours a day, six days a week, the penalty for which is to pay a fine or close for two months. However, because there is likely to be a shortage of child care facilities during the strike, it is not likely that any of the facilities would be shut for two months.

Day care centers in Seoul, Incheon and other major cities that are participating in the strike have said they will consider backup measures such as having a supervisor on duty, according to the Health Ministry.

Day care centers in Daejeon, Gwangju, North and South Chungcheong and North Jeolla have decided not to participate in the strike.