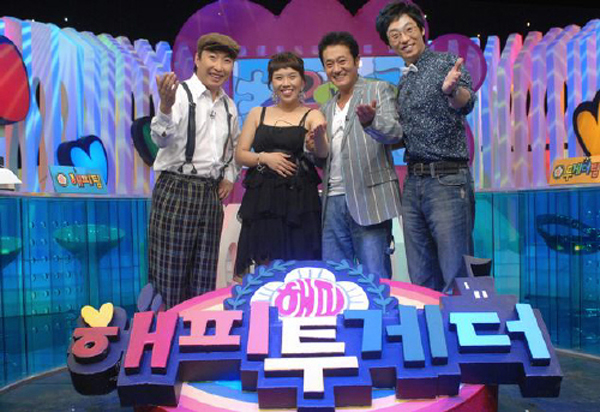 What do entertainers Lee Hyori, Shin Dong-yup, Yoojin and Tak Jae-hoon have in common? The answer is that they were all once hosts of the KBS variety show “Happy Together.” To mark the show’s 10th anniversary, the former hosts of the program made a special appearance on the show, currently hosted by comedians Yoo Jae-seok, Park Myeong-soo, Park Mi-sun and Shin Bong-sun.

KBS released some preview screen shots from the recording of the special episode on Feb. 27.

In the episode marking the show’s first decade, popular segments such as “Sauna Talk,” “Tray Karaoke” and “Happy Together Friends” will be reenacted by the guests of honor. Plaques of appreciation will also be awarded to the former hosts.

The hit talk show was first broadcasted in November 2001 and still remains one of the most popular talk shows on Korean TV. The program is a pioneer in the talk-show genre for its innovative use of props and games, generating many raucous laughs.

The special episode will be broadcast in two parts; the first is slated to air on March 1 while the second will be shown on March 8.