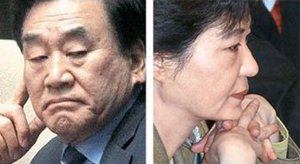 The ruling Saenuri Party yesterday announced its first batch of candidates for the April 11 legislative elections, but the process was marred by a head-on collision between the party’s emergency leadership and nomination review committee over the candidacy of a key Lee Myung-bak loyalist.

In an abrupt announcement yesterday morning, the nomination review committee named 21 candidates, including Representative Lee Jae-oh, a key member of the Lee Myung-bak faction of the party. The emergency leadership quickly challenged the announcement, saying it had not approved Lee’s nomination.

In the middle of a meeting with the party leadership, Jung Hong-won, the nomination committee head, walked out and announced the names of 21 candidates, including Representative Lee, who once worked as a special political minister of President Lee.

Reformists in the emergency leadership, including Kim Chong-in and Lee Sang-don, have demanded that the 67-year-old four-term lawmaker, along with other old-timers, be ruled out of running next month to give way to fresh blood to rejuvenate the party’s public image.

Concerns have grown, however, that eliminating the lawmaker, who has strongly defeated liberal rivals in his Eunpyeong B District of western Seoul, would deepen an already bitter schism in the party. After supporters of Park Geun-hye, the current interim leader, were largely denied nominations in 2008, the party experienced a split between pro-Lee and pro-Park factions for years.

The emergency leadership yesterday requested that the nomination committee reconsider its selection, and it agreed. After another round of deliberations and voting, Jung said the committee once again approved the list and called it final.

“Of the 10 members, nine voted and reapproved it,” Jung said.

“We can have different opinions,” Jung said. “It’s not necessarily a conflict.” He went on to say that the committee will no longer brief the leadership about its nominations.

During the seven-hour confrontation, Park made no public comment.

Meanwhile, the National Assembly approved a plan yesterday to increase the number of lawmakers to 300 from the current 299, only for the April 11 elections.