Pregnant woman now says waitress did not kick her

Pregnant woman now says waitress did not kick her 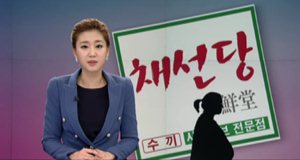 A 33-year-old pregnant woman surnamed Yoo confessed to police that she had fabricated her story accusing a waitress at a popular shabu shabu, a hot pot dish, restaurant of throwing her to the floor and repeatedly kicking her in the stomach.

According to Seobuk District Police in Cheonan, Yoo maintains that the 40-year-old Chaesundang employee did push her onto the floor of the restaurant on Feb. 17, but now retracts her statements about further assault that she posted online via Twitter.

“I sincerely apologize to the waitress and Chaesundang for posting a false rumor on the Internet,” Yoo said to the police during questioning.

“I didn’t know that this case would grow this big. I felt terrified of losing my baby when I fell to the floor because of the waitress, so I just wanted to share the story with people in order to prevent another fight.”

According to police, Yoo posted a message on her Twitter account lambasting the Chaesundang restaurant in Cheonan, South Chungcheong, which she had visited for lunch with her nephew. She stated that she had been assaulted by the waitress after complaining about her poor service and unfriendly attitude.

Yoo said that the waitress threw the plates onto the table and never responded to her efforts to order. This led Yoo to leave the restaurant just 20 minutes after arriving. But as she was exiting, Yoo alleges that she was suddenly hit in the back by the waitress, which escalated into a hair-pulling catfight.

On the Twitter posting, Yoo insisted that after she informed the waitress of her pregnancy, the 40-year-old proceeded to kick her in the stomach and insulted her.

The online community’s reaction was immediate, with retweets and blogs picking up on the incident. A surge in demands for an apology led Chaesundang to issue a statement on its Web site the following day.

Criticism, however, continued to spread. The restaurant eventually requested an investigation into the fight last week.

Seobuk District Police said it had questioned the waitress prior to summoning Yoo. The 40-year-old claimed that every time she approached Yoo’s table she was insulted. CCTV footage is currently under review and the police are searching for eyewitnesses to clarify the cause of the fight.

Police said that the waitress is likely to be punished although Yoo does not want to push further charges. A medical certificate proving the injuries Yoo sustained for two weeks as a result of the fight has already been submitted as evidence.