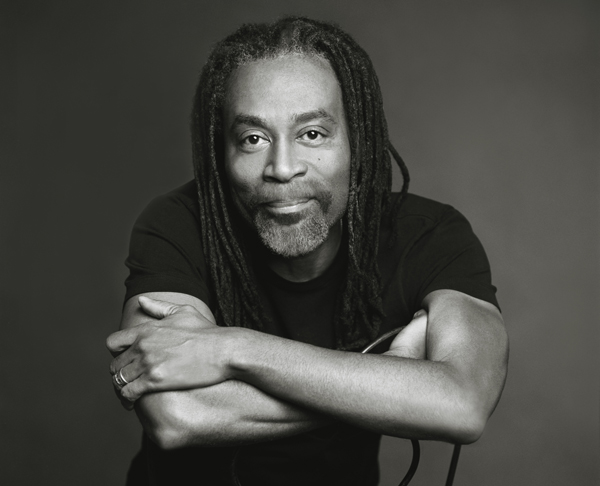 When you hear the name Bobby McFerrin, the rhythms of his popular 1988 megahit “Don’t Worry, Be Happy” may start to fill your head. 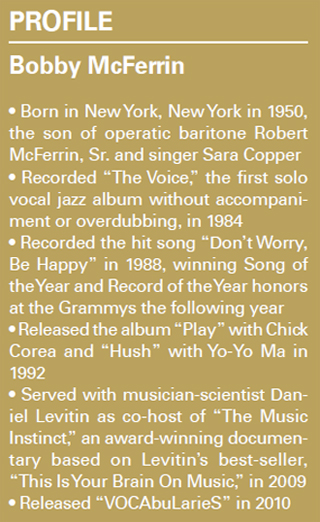 But while it was the song that first brought widespread attention to the 10-time Grammy Award winner and his unique and versatile vocal techniques, he said in a recent interview with the Korea JoongAng Daily that he once felt it was “like a pair of golden handcuffs” because he was eager to move on to other things.

Since then, however, he has come to terms with the almost universal recognition the song bestowed upon him, and says that it now makes him “happy when people tell me the song means a lot to them.”

Next week, he will give his third concert in Seoul as part of his Asian tour.

The musician, who is often described as a “vocal innovator,” has over the past two decades succeeded in crossing musical genres and in the mid-1990s he began appearing as a guest conductor for orchestras across the United States and Canada.

He has also recorded a handful of solo albums in addition to collaborating with instrumentalists ranging from pianists Chick Corea and Herbie Hancock to Joe Zawinul, drummer Tony Williams and cellist Yo-Yo Ma.
Following his first two concerts here in 2004 and 2008, McFerrin gave an impressive performance-lecture using the pentatonic scale to show the audience the way human brains are wired at the World Science Festival in June 2009. 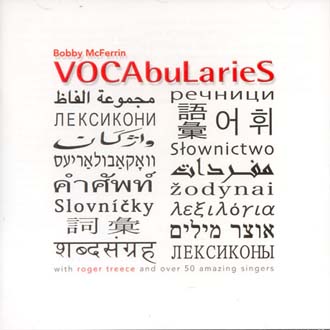 In 2010, he released the highly experimental album “VOCAbuLarieS,” his first new release in eight years. With an aim to explore the potential of the human voice, the album features a wide range of musical genres from classical to jazz, R&B, gospel and traditional African. The seven songs on the album feature 50 of the world’s finest singers and over 1,400 vocal tracks recorded one at a time and in small groups.

In the following excerpts from the e-mail interview, the 62-year-old artist shares his plans for the upcoming tour and memories from his life as a musician.

Q. Could you explain what the Seoul concert will be like? Your Web site says you will be singing solo. Does that mean the repertoire will not include songs from your latest album?

A. This year in Seoul I’ll be giving a solo concert. That means I’ll be up on stage all by myself, singing to the audience and getting them to sing along with me. They’re never really solo concerts, I always turn the audience into a choir!

You are known to be a great improviser and at past concerts here you’ve improvised with traditional Korean musicians. Will you be doing that again?

I love solo concerts; they give me such a great chance to bond with the audience. It’s just us, no band, no special effects.

I won’t sing songs from “VOCAbuLaries” in Seoul this time. To perform those songs I’d need a really great choir and a couple of weeks of rehearsal. Maybe someday I’ll come back to Seoul to do “VOCAbuLaries.” I know there’s a great choral music scene in Korea.

What memories do you have of your previous concerts in Seoul? What was special about the audience or musicians here?

I remember I could tell that the audience was full of musicians. When I asked them to sing, it was clear there were a lot of excellent, well-trained ears in the room! I also remember that a very gifted young cellist came to play a duet with me on stage.

What do you think about Korean traditional music?

I haven’t heard as much traditional Korean music as I’d like. I travel a lot, and while I’m on the road I usually live a pretty quiet life, saving my energy for concerts. So I haven’t seen much of Korea.

You must have heard people identify you as the “Don’t Worry, Be Happy” singer tens of thousands of times. But how do you feel when that is the only information they have about you as a musician, even though you’ve done so many things since then? Have you ever felt that the song limits the general public’s perception of you?

I admit, there was a time when I felt like that song was like a pair of golden handcuffs; I knew I was very lucky that everybody wanted to hear it, but I wanted to move on to the next thing. Now I’m happy when people tell me the song means a lot to them. I’m even happier when people tell me they loved the song so much they came to one of my concerts, which got them excited about singing, and now they sing all the time.

You are now over 60 years old. Do you feel your voice is changing? What other changes have you experienced with the passage of time?

I do notice some changes. They aren’t the ones I expected; my vocal range and my energy level are pretty much the same. But I’m more interested in quiet. I spend more time walking in the woods, studying scripture. I sing more quietly. I listen more intently.

What songs or musicians have influenced you over the years?

There are some musical memories that are so vivid, moments that changed my whole way of hearing. They’re mostly not specific songs from specific albums.

I remember music playing in the house when I was little, everything from Billie Holiday to symphonies. I remember playing at conducting along with the records. I remember my mother singing in church and my father practicing and teaching [his father, Robert McFerrin, Sr., was the first African-American to sign a contract with the Metropolitan Opera Company]. I remember watching a movie about Africa and hearing a kind of drumming and a type of singing I’d never heard before. I remember seeing Miles Davis with his electric band. I remember seeing Herbie Hancock and his band play one song that was completely improvised and lasted 40 minutes. I remember seeing Keith Jarrett play solo piano for the first time. Each of those experiences changed me forever.

Some specific songs I really love: “Smile” [composed by Charlie Chaplin], “Over the Rainbow” [composed by Harold Arlen with lyrics by Yip Harburg], the Brindisi aria or “Drinking Song” from Verdi’s opera “La Traviata,” Gershwin’s “Rhapsody in Blue,” “The Frog” by Sergio Mendes, “The Boxer” by Simon & Garfunkel, Eric Clapton’s “Born Under a Bad Sign,” Bach’s “Air on the G String.” But I’m not sure which recordings I heard first.

I’ve gotten to spend a lot of time singing by myself, figuring out the incredible range of sounds the voice can make. I want to do more of all those things. The work I started isn’t finished! So I’m thinking about my upcoming tours with Chick Corea and The Yellowjackets, and how I want to sing on my next album. For that, I’m looking even further into my past: I’m going to sing the American negro spirituals, songs I heard my father sing many times. I’m going to try to find my own way of singing them, a way that lets the audience sing along. It’s going to be great, really fun.