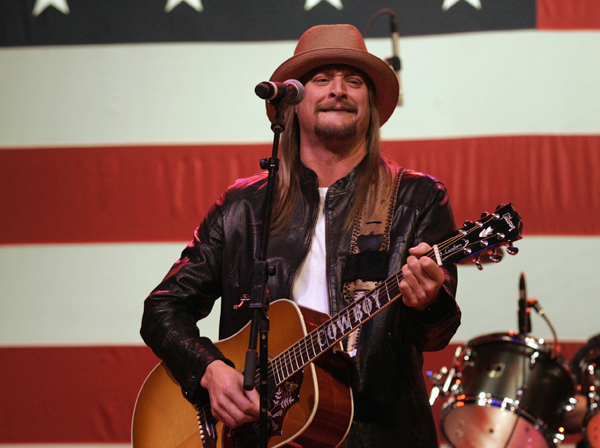 The Republican presidential candidate, after all, begins and ends almost every event with Kid Rock’s song “Born Free.’’

So Romney’s people reached out to Kid Rock’s people. The answer came back: The rocker-rapper, famous for songs like “Bawitdaba’’ and “Cowboy,’’ would consider playing “Born Free’’ at Romney’s last campaign rally before Tuesday’s primary. But only if he could talk to Romney first.

The former Massachusetts governor landed in Michigan on Thursday, climbed into a black Suburban with two aides and drove to Kid Rock’s house in Clarkston, Michigan, just northwest of Detroit.

“I asked him whether he might come here tonight,’’ Romney explained Monday to the crowd gathered at the Royal Oak Music Theater.

Romney got a grilling from the rocker for more than an hour, campaign aides said. Would he help the state of Michigan? Romney said he would. Would he help the city of Detroit? Kid Rock himself had just committed to help raise a $1 million for the struggling city’s symphony. Romney said yes. And the singer born with the name Bob Ritchie pressed Romney about how he would support U.S. service members as president.

Romney left without an answer about the performance. The next day, he received an e-mail: Kid Rock was in.

He gave his standard campaign speech and then announced: “I’m happy to introduce a son of Detroit, a friend, a guy who makes great music, who introduces me by DVD everywhere I go - Kid Rock!’’

Kid Rock performed the song - “wild, like an untamed stallion .?.?. I was born free’’ - as the meticulously dressed Romney watched. AP