To Sunday: This exhibition displays 550 works including photographs and documentary films that are part of a collaborative effort by Magnum Photos; the Global Fund to Fight AIDS, Tuberculosis and Malaria; and an international financing organization. 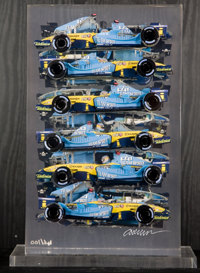 To Mar 18: Many contemporary artists are still influenced, directly or indirectly, by French artist Marcel Duchamp, with the idea that any object in the hands of an artist can be transformed into art.

This show features about 40 works by 19 post-Duchamp artists whose works imply his influence.

The participants range from the French-born American Arman (1928-2005) famous for his “assemblage” art of accumulated objects such as gloves or musical instruments to contemporary artists such as Marc Quinn and Damien Hirst, who are part of the Young British Artists group.

Admission is free. Hours are 10 a.m. to 7 p.m. Mondays through Saturdays. Opera Gallery is located on the first floor of the Nature Poem building near Cheongdam Intersection. Go to Cheongdam Station, line No. 7, exit 9, and walk for 10 minutes.

To April 12: The exhibition shows 70 paintings and one sculpture by modern artists in the Dutch Magic Realist movement and the contemporary artists who have inherited their art. The works on display also reflect the paintings of the Dutch Golden Age of the 17th century and earlier paintings that feature realistic depictions and mystic symbolism.

The exhibition is divided into three sections of portraits, still lifes and landscapes.

The still lifes in this exhibition employing realistic painting techniques and a meditative mood will remind viewers of earlier Dutch masters known for their “breakfast pieces.” Many of the portraits in the show have an Expressionist mood, but they, too, can be linked to the 17th-century Dutch portraits, which abstained from the rhetoric of more aristocratic portraits yet also exposed the sitter’s emotions.

To Apr 21: While Swiss design is well known in Korea, its fine art is not so familiar. This exhibition will give viewers a glimpse of renown Swiss artists.

The show features some 30 art works including site-specific installations, drawings, objects and video works by three individual artists and one team of artists.

Artists who have been strongly inspired by nature have been chosen for this exhibition.

Works by Franziska Furter lead viewers to observe nature from unique viewpoints. One of the pieces on display is the large black paper sculpture “Monstera” that depicts a tropical plant of the same name.

The most eye-catching piece in the exhibit is the wooden construction by Gregory Chapuisat and his younger brother Cyril. It is built with complicated passageways and stands high in a corner of the gallery, where the space is open from the first through the third floors. Visitors can go up along the passages of the cabin.

The other two artists are Adrien Missika, who shows an artistic video “Love to Death,” and Luc Aubort, who presents a series of works reflecting his exploration of materials and forms.