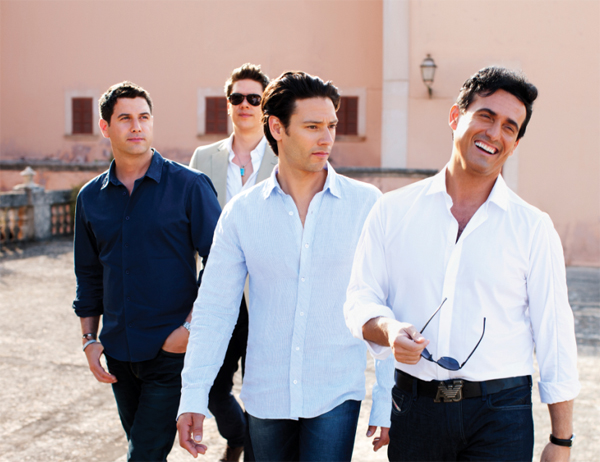 Saturday: Popera group Il Divo plays its first concert in Korea. Since its formation by television impresario Simon Cowell three years ago, the four-member vocal group has performed throughout the world and sold more than 25 million albums.

The group was the first recipient of the artist of the decade award at the Classic Brit Awards in 2011. Later in the year, the group released its sixth album “Wicked Game,” which peaked at No. 10 on the Billboard 200 chart.

The repertoire will mostly come from “VOCAbuLarieS,” his 2010 album that mixes jazz, African folk, classical and R&B sounds.

March 9: Scottish soprano Lisa Milne is having her second concert in Korea with the lead of conductor Sung Shi-Yeon. Lisa Milne has been on international opera stages such as The Metropolitan Opera in New York, English National Opera and others. Moreover, she has been on various concert stages such as Boston Symphony Hall, Berlin Philharmonic Concert Hall, Seoul Philharmonic Orchestra, and many others. Now she is more than ready to attract audiences with her solo concert by singing Mussorgsky’s Introduction to Khovanshchina, R.Strauss’s Vier Letzte Lieder and Brahms’s Symphony No. 1.

March 9 to 10: Pop Jazz artist, Pudditorium Kim Jung-bum is having his concert at Evans Lounge. He stepped into the music field in 2003 with a pop jazz band named “pudding” but he felt the need to study more and flew to United States to study music in Berklee College of Music. To study more intensively on jazz, he enrolled to New York University and jazz in his master’s course. After all the years of study, Kim decided to have his solo project named Pudditorium and he went to every state in United States in order to find engineer and sessions he wanted. In response to his hard effort, engineers and sessions that helped Kim’s solo project have previously worked with international singers such as Beyonce Knowles, Norah Jones, Eric Clapton and Yo?Yo ma. Kim will be singing his second album, Episode: Reunion.

March 12: Cellist Yo-Yo Ma has been gathering artists from Korea, China, Mongolia, Iran, India, Turkey and other countries for a revival of his Silk Road Project, which he launched in 1998. As its name suggests, the project promotes the study and preservation of the cultural and intellectual traditions along the historic Asian trading route.

March 12: U.K. rock band Duran Duran will be performing its third concert in Korea this March. Despite the occasional breakups and regroupings in the 1990s, the band has sold over 80 million records worldwide, produced 18 hit singles in the United States and had 30 tracks reach the top-30 charts in the United Kingdom. Formed in Birmingham, England, in 1978 by keyboardist Nick Rhodes and bassist John Taylor, Duran Duran has been continuously writing rock songs that have been well received across the world. The group recently released its new record “All You Need is Now.”

March 29: Pianist Kim Sun-wook returns to the Korean music scene after a one-year hiatus. The 2006 Unesco Person of the Year held a solo concert at the Seoul Arts Center in 2010 and returns to the venue to perform Beethoven’s piano sonatas.

RedFoo and SkyBlu call their music “party rock,” and their songs “Shots,” “Get Crazy” and “I’m Sexy and I Know It” suggest they’re not talking about bingo night.

The group was nominated for the best dance/electronica album at the 2010 Grammy Awards and has sold more than four million records.

To June 27: The jami traditional concert will be held at Samcheonggak, a cultural site located in Seoul. Jami means “good food with a lot of nutrition” as well as “fun” in Jeju dialect. The show will include a course menu of Korean cuisine and traditional tea. The concert is held every Monday, Tuesday and Wednesday at noon.