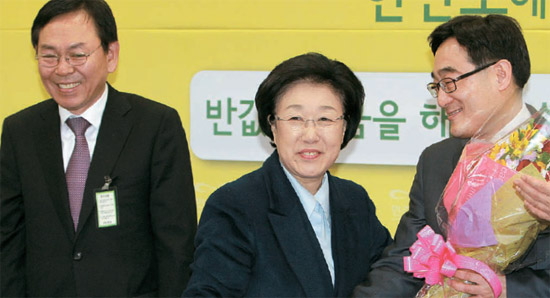 Despite the efforts of the Democratic United Party leadership to normalize the candidate nomination process, a disgruntled senior politician decided to leave the party yesterday, indicating a growing fissure in the largest liberal opposition party over the candidacies for the April 11 legislative elections.

Han Gwang-ok, a senior DUP member who is a Kim Dae-jung loyalist, held a press conference yesterday declaring that he will leave the party in protest of the nomination process and will run independently in the general elections.

Han, who served as the presidential chief of staff for the Kim administration, recently failed to win the nomination for Seoul’s Gwanak A District.

Han, who once served as the head of the DUP’s predecessor Millennium Democratic Party during the Kim administration, said it was painful to leave a party he had been a member of for three decades, but that he saw no other choice. He also criticized the Roh Moo-hyun loyalists for purging long-standing pillars of the party under the justification of “nomination reform.”

After Han’s move, a mass defection of veteran party members is expected. Former democratic party lawmakers who couldn’t receive the nomination are said to have formed their own group, signaling the possible establishment of a new party.

Meanwhile, the DUP leadership said it will not file a candidate in Gwangju’s Dong District, where a campaigner recently committed suicide over allegations of illegal campaign activities.

DUP Chairwoman Han Myeong-sook announced the decision, adding that the party will act sternly to counter any illegal campaign activities.

After a brief suspension this week, the nomination review committee resumed its candidate selection yesterday. The nomination committee decided to resume their selections after Han promised that the committee will be allowed to work independently.