Rifts widen in DUP as elections loom on horizon

Rifts widen in DUP as elections loom on horizon 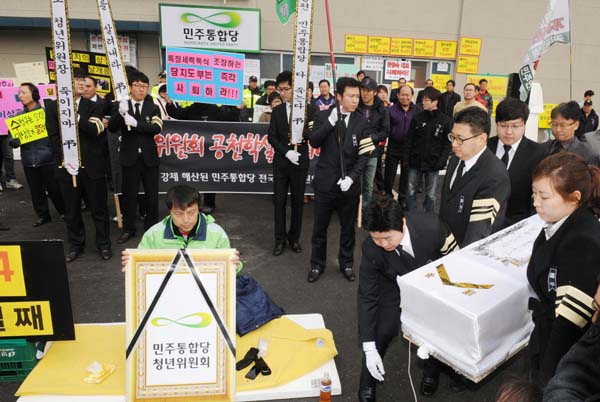 A faction of Democratic United Party members protest yesterday in front of the party’s headquarters in Yeongdeungpo District, southwestern Seoul, against what they call an unscrupulous nomination process in light of the upcoming April 11 general elections. They also held a mock funeral ceremony as a part of their protests.[NEWSIS]

The leadership of the largest liberal opposition party led by Chairwoman Han Myeong-sook is facing a test only 50 days after her inauguration due to growing conflicts within the Democratic United Party over the nomination process for next month’s legislative elections.

The latest rift was revealed yesterday as Lee Yong-deuk, a member of the DUP Supreme Council and the head of the Federation of Korean Trade Unions, threatened to “take bold action,” hinting at a possibility that he or the nation’s major labor umbrella group could sever ties with the party.

“The DUP is facing a crisis,” Lee said in a press conference yesterday. “The founding spirits of political reform and party reform were damaged, and the spirit of unity through which the labor and civic communities can join hands together with the party has gone missing.”

Lee said the Federation of Korean Trade Unions will make an important decision if the DUP fails to return to its founding ideals. Asked what the decision will be, Lee said “it can include everything,” hinting at the possibility that he could step down from the leadership post or that the umbrella labor union would walk out from the party.

Since last week, Lee has been boycotting the Supreme Council meetings in protest of the nomination process. He claims the federation was being treated unfairly.

He said yesterday the nomination process was dominated by the elites through decisions behind the scenes.

Lee also made it clear that he will not run in the April 11 legislative elections, denying an earlier report by the Chosun Ilbo.

The newspaper quoted Saturday a draft of the DUP’s candidate list that Lee was given as the second highest candidacy to become a proportional representative.

Lee was not the only one dissatisfied about the DUP’s nomination process.

About 50 politicians who failed to win nominations in the earlier rounds of screenings, along with hundreds of their supporters, held a rally in front of the party’s headquarters yesterday and challenged the decisions.

As of now, the DUP has decided that it will make nominations at 99 constituencies while holding primary races at 48 districts. The failed applicants demanded they be allowed to join the primaries.

Representative Jeon Hyun-heui also held a press conference yesterday and criticized the party leadership for treating her unfairly. Jeon, a proportional representative who announced her bid in Gangnam B District of Seoul, said the leadership appeared to be favoring Chung Dong-young, former presidential candidate of the liberal opposition party, and leaning toward nominating him instead of holding a primary in the constituency.

“I will wait and see how the leadership decides,” Jeon said. “And I will make an important decision.”

Others also complained that Han was favoring Roh Moo-hyun loyalists and her Ewha Womans University alumni in the nomination process. Some also criticized Han’s leadership for lacking a clear election strategy, even demanding she give up her candidacy to become a proportional lawmaker.