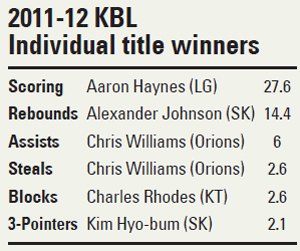 As the 2011-12 Korean Basketball League wrapped up its regular season on Sunday, winners of individual titles were determined. Unfortunately, many of the awarded players won’t be playing in the post season.

Changwon LG Sakers’ Aaron Haynes became the first player in KBL history to claim back-to-back scoring titles. The 31-year-old, who played for the Seoul Samsung Thunders last year where he was the best scorer with 23.1 points per game, edged Seoul SK Knights’ Alexander Johnson just 0.22 points in scoring average after marking 27.56 points a game this season.

The 29-year-old Johnson was looking for a double crown, but had to settle for the rebound title with 14.38 per game, edging Ulsan Mobis Phoebus’ Terrence Leather by 1.47. Among Koreans, Jeonju KCC Egis’ 221-centimeter (7 feet, 3 inches) tall center Ha Seung-jin was the top performer in rebounds, grabbing 9.95 per game.

The race for the assist title was also a tight one as Goyang Orions’ forward Chris Williams edged Phoebus’ point guard Yang Dong-geun by one.

Both players had 320 assists before heading to the final game on Sunday, but Williams collected five while Yang delivered four. As a result, the 32-year-old American became the first foreigner in KBL history to win the assist title, with 6.02 per game. Williams was also the league’s best player in steals this season. He averaged 2.63 per game, edging Anyang Korea Ginseng Corporation’s Kim Tae-sool by 0.73.

Meanwhile, Sonicboom’s Charles Rhodes was the top performer in blocks (2.53) and field goal percentage (63.51), while Knights’ Kim Hyo-bum successfully defended his 3-point title with 2.1 per game.