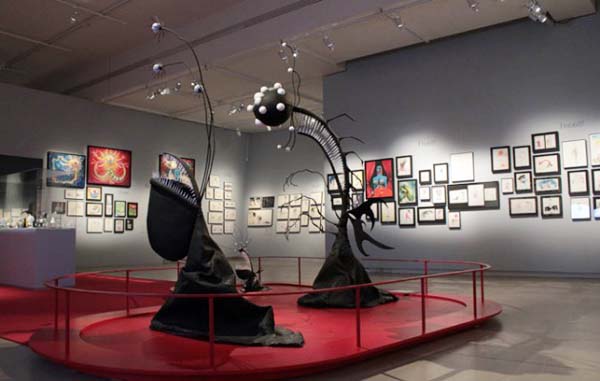 A general view shows an exhibition dedicated to the work of U.S. director Tim Burton on March 5 at the Cinematheque in Paris. [AFP/YONHAP]


PARIS - Peopled with lonely little monsters, dancing corpses and boggle-eyed creatures from the underworld, Tim Burton’s cult universe comes to Paris this week with a show that journeys through his life’s work.

Some 500 sketches - the starting point for all of Burton’s films - whisk visitors deep into the director’s surreal inner world, with gothic doodles dating back to his misfit childhood in Burbank, a suburb of Los Angeles.

“These are things that were never meant to be seen by anyone,” the filmmaker said at a press conference introducing the traveling exhibit, titled “Tim Burton,” which was first set up for New York’s Museum of Modern Art in 2009. “But I am so grateful to the creators!”

Film clips, photos and props complete the picture, from a pumpkin-headed scarecrow from the 1999 “Sleepy Hollow,” to a life-sized “Martian Anatomy” chart from the 1996 “Mars Attacks.”

When Ronald Magliozzi went rifling through Burton’s accumulated possessions, the curator initially planned a show looking back at his career.

“We discovered he had these vast archives,” he told AFP. “His parents had saved every last drawing he had ever done. We realized this would be an exhibit of Tim Burton’s art - art that we didn’t even know existed.”

Gems include Burton’s earliest animated film, made in 1974 and unearthed by a former art teacher: a 33-second-long, gory attack by a pair of pliers on a green plasticine monster.

“I never try to make it just dark. I’m always drawn to material that’s both funny and sad, light and dark,” he said.

Paired with witty little poems, his sketches come under headings such as “Childhood,” full of bandaged little mummies, or “Couples,” one of them of a man and woman tucking gorily into each other’s shins.

“Drawing keeps your hands busy. And it keeps depression at bay,” said Burton, who doodles constantly, including on restaurant napkins - with dozens from the Paris Ritz lined up on display.

Glow-in-the-dark creatures, all eyes and tentacles, spin on a carousel like a kind of “monster-go-round,” while a gallery of polaroids from the 1990s features a macabre mother and child, deathly blue and covered in Frankenstein stitches.

When the show was unveiled in New York, “the art world was a little rude - perhaps that’s the best way of putting it,” said the director.

“But the best compliment I got was from kids, who thought ‘Well if he can do it, maybe I can as well.”

Today, Burton gives thanks for crossing paths with inspiring art teachers, “Ones who just said ‘Draw what you feel, draw what you can.’ That changed my life,” he said. AFP