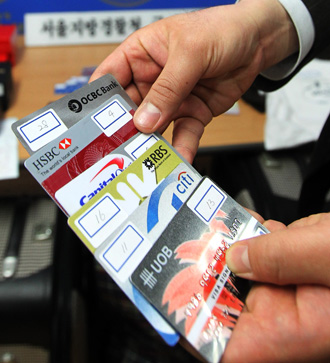 Police said yesterday they arrested three Malaysians who are suspected of using illegally cloned credit cards for buying 290 million won ($257,230) worth of luxury goods in Korean department stores and duty-free shops. The suspects targeted Korean department stores and duty free shops as they still accept magnetic credit cards that are much easier to clone than the integrated circuit cards (IC cards), which are recognizable by their gold-colored chips.

The Seoul Metropolitan Police Agency said the three, including a 41-year-old man, used about 100 forged credit cards to purchase luxury designer bags made by Louis Vuitton, Gucci, and Prada, Bulgari watches, as well as high-end IT gadgets such as the iPad and Galaxy Note. The police said that the suspects visited Korea three times from Feb. 10 to Feb. 29, and used the credit cards 95 times. 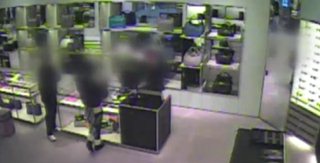 The police said the suspects planned an elaborate scheme, entering the country with forged U.K. passports and only staying one night per visit in order to evade tracking by the police.

“Stores will begin to distrust foreign tourists if they use too many invalid credit cards,” a spokesman for the police said. The police will continue to investigate into credit card fraud and asked for cooperation from Malaysian authorities in tracking down potential criminals.