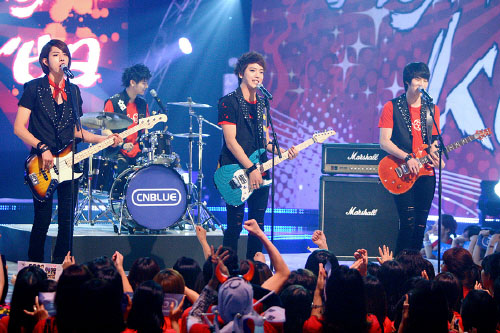 FT Island and CN Blue touched down in Los Angeles on Thursday in preparation for their Friday concert in Los Angeles and talked with the press about their ambitions for U.S fame.

When asked what strategy he uses when performing for foreign audiences, Jung simply said he tries to enjoy himself. “If we are having fun on stage, I know that the fans will have fun, too. I’ve been to many countries, and despite the language barrier, I’ve come to realize that music unites us all.”

Lee Jae-jin, bassist and vocalist from FT Island, said he believes that his group’s biggest appeal is simply about where its members come from. “The emotions in our songs, which stem from our Asian heritage, will set us apart from American bands,” he explained.