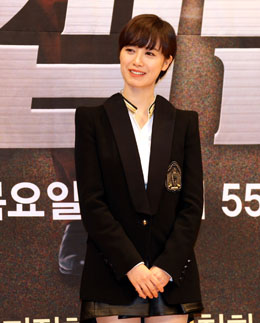 Korean actress Ku Hye-sun has been cast to play the female lead in the new Taiwanese drama “Absolute Boyfriend,” in which women can order boyfriends customized to their preferences.

The show is a TV adaptation of the often fantastical manga, or Japanese-style animations, and Ku will play the character Xiao Fei, who falls in love with the boyfriend she ordered.

A poster promoting the Taiwanese drama was released by YG Entertainment on Thursday, and the actress can be seen in her usual cute demeanor wearing pink pajamas and slippers, with two male characters in the background.

Ku’s Taiwanese co-stars are Jiro Wang from the group Fahrenheit and actor Xie Kun Da. The drama will focus on a love triangle that will develop between the characters played by Ku, Wang and Xie.

The first episode will be broadcast on April 8 on the Taiwanese public TV network GTV.