Posco makes lighter steel for use in EVs

Posco makes lighter steel for use in EVs 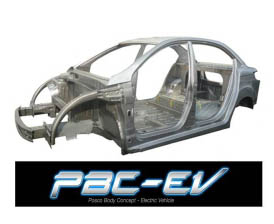 Posco has developed a new kind of steel for electric cars that is much lighter than the product currently in use in the market today, Korea’s top steelmaker announced during a presentation at its Global R&D Center in Songdo, Incheon, yesterday.

The company said it has successfully developed a kind of steel that it calls Posco Concept-Electric Vehicle (PBC-EV). The steel will be used to make the bodies of electric vehicles.

“PBC-EV is the outcome of our sincere efforts toward green growth and co-prosperity with our clients,” said Posco CEO Chung Joon-yang. “By combining Posco’s cutting-edge steel materials and technological prowess, we are making a good contribution to the commercialization of electric cars.”

To increase both the intensity and flexibility of its new product, Posco has adopted two new methods it calls “hot press forming” and “multidirection roll forming.” It claims a car made of the PBC-EV steel can help reduce greenhouse gas emissions by 50 percent compared to ordinary cars, the company said.

Posco said it can develop the new product without incurring additional production costs as it uses methods very similar to those already in use.

“Posco plans to make consistent efforts to develop lighter steel materials for cars and cost-saving technologies to cater to the interests of our clients,” the company said.

Meanwhile, Posco also held a ground-breaking ceremony for another of its green initiatives on the Songdo Campus of Seoul’s Yonsei University yesterday.

The company donated 20 billion won ($17.9 million) to construct a four-story energy-efficient office building and a three-story residential building in cooperation with a research center at the university. The project is billed as “Posco Green Building.”

The two environmentally friendly buildings will be built with earthquake-resistant steel supplied by Posco, and electricity will be produced from around 100 eco-friendly energy sources. The buildings will scale back carbon dioxide emissions by about one million tons a year.