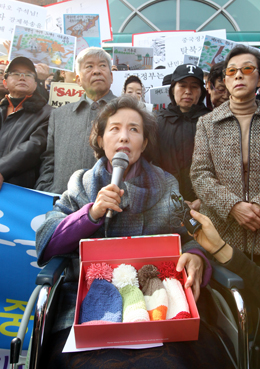 Park Sun-young, foreground, a lawmaker from the conservative Liberty Forward Party, announces yesterday that she will make a trip to Geneva to attend a meeting of the United Nations Commission on Human Rights in order to raise the issue of repatriation of North Korean defectors by China. Park collapsed on March 2 after staging a hunger strike for 11 days in front of the Chinese Embassy in Seoul. Meanwhile, United Nations Secretary General Ban Ki-moon expressed “deep concern” Thursday over the fate of North Korean defectors in China, which has emerged as a key diplomatic issue between Seoul and Beijing, according to his office. [YONHAP]