Trying to get the word out on gugak

Trying to get the word out on gugak 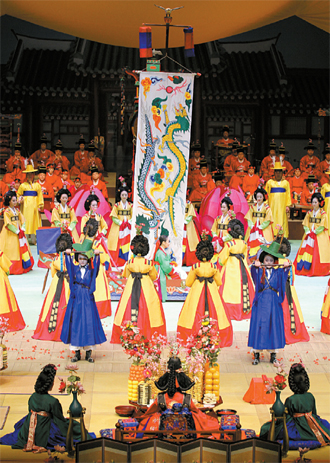 As the Hallyu enjoys its current international recognition, many Korean cultural agencies, whether dealing with modern or traditional culture, are trying to cash in on the trend.

However, the National Gugak Center, Korea’s center for preserving and promoting traditional music, or gugak, says that it will first improve the gugak foundation locally and then work toward wider promotion of what Korean music has to offer.

“It’s important that the center becomes the place for fun gugak,” said the head of the center Lee Dong-bok at a press conference last Thursday. It’s been 100 days since he took the position at the National Gugak Center last November.

Lee said the center will support gatherings of people who enjoy listening to or playing gugak music.

“Sports can spread quickly because many amateurs have groups and clubs where they can play with one another,” said Lee.

The center will first find out how many clubs there are across the country and specify the items the center can support.

It will offer a practice room at the center and lessons given by members of the center so that amateur performers can learn professional skills.

In addition, to familiarize the general public with gugak, the center will continue providing music to different media outlets.

Since 2008 gugak has provided the background music for subway announcements.

Starting last year, the center also provides the music for Incheon International Airport, so that visitors in transit can hear gugak music as they listen to flight announcements.

“It’s important to have a large resource of our music, and have it reproduced and widely used on many CDs and DVDs,” said Lee.

The center is trying to brand the sound so that it will be associated with other Korean traditional arts, such as taekwondo or Korean food.

It even encourages people to set their ringtones to gugak. It is also currently possible to download a gugak melody from the center’s Web site, www.gugak.go.kr, and use it as a ringtone.

There is one melody uploaded for each traditional Korean music instrument, such as the string instrument gayageum, or the wind instrument daegeum.

As the center tries to familiarize the public with gugak, it also plans to keep improving the grand gugak tradition. This year, the center will hold two “Complete Series” performances in March and April.

During the two-day performances in March, the center presents the work “Yeongsanhoesang”, a type of poongryu, or music enjoyed by scholars.

The music was originally composed to praise a Buddhist saint, but it lost its Buddhist character and became more secular in style as it was performed in the Joseon era (1392-1910), a time when the country bowed to Confucianism.

In April, as the second part of the series, the center plans to perform folk music, particularly the kind performed in gut, or shamanistic ceremonies.

After working to build a gugak foundation for a year within Korea, the National Gugak Center hopes to perform one of its popular repertoires in New York later this year.

“Taepyeongsogok”, a piece played to commemorate the 60th birthday of Hyegyeonggung Hong, mother of King Jeongjo (1752-1800) and a wife of Crown Prince Sado (1735-1762), will be performed to commemorate the 130-year anniversary of alliance between Korea and the United States.

Although performing the exact repertoire would be meaningful, it would also generate some logistical challenges.

“It would be a good opportunity to show the entire music and dance performance in all its onstage grandeur to people who have previously only had a chance to see pieces of it, if anything,” said Joo Jae-keun, curator of the National Gugak Center.

“However, we still need to figure out how we are going to fly out 150 performers and all their instruments.”

When the center performed the “Taepyeongseogok” in the past, it usually invited some special guests to take the place of Hyegyeonggung Hong, the event’s original guest of honor.

If the event takes place, the center will again invite some VIPs to have an experience shared by royalty.