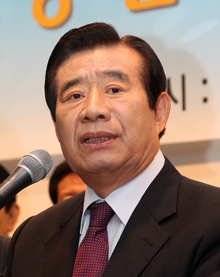 Led by a senior politician who served as a key aide to former President Kim Dae-jung, a new political party was launched yesterday, declaring war against the Democratic United Party ahead of next month’s legislative elections.

Han Gwang-ok, a former four-term lawmaker who served as Kim’s Blue House chief of staff from 1999 to 2001, held a press conference yesterday to declare the launch of the new party.

The 70-year-old politician, who also headed the Millennium Democratic Party, a predecessor to the DUP, from 2001 to 2002, recently left the largest opposition party in protest of its decision to not give him a nomination.

In a statement announcing the party’s launch, Han said the DUP has gone back to the era of the Uri Party and Roh Moo-hyun by nominating candidates who were largely responsible for the failure of the Roh government.

“The Roh loyalists should have disappeared but they acted like occupation forces and massacred the true Democrats, causing a regression of history,” Han said.

He also said the DUP’s identity is now uncertain because candidates who are considered pro-Pyongyang won nominations.

Han also attacked the ruling Saenuri Party for “becoming a private party of Park Geun-hye” and “returning to the era of military dictatorship.”

Han also left room for building ties with other factions such as the loyalists of former President Kim Young-sam.

“We fought for democratization together,” Han said. “It is possible to have a candid discussion with them. The door is open and I will think about it.”

Although the supporters of Kim Young-sam were largely members of the conservative ruling party, his second son, Kim Hyun-chul, was rejected by the Saenuri Party in the nomination process. He left the party last week, vowing a political retaliation against Saenuri’s interim head Park. At the time, he also warned that his father wouldn’t sit idly by.

Han said yesterday that he will contact Representative Park Jie-won, a key Kim loyalist and a member of the DUP’s Supreme Council, to expand his party’s influence.

Han also said yesterday that his new party will try to field more than 200 candidates around the nation.

It, however, remains to be seen if the new party, tentatively named the “Original Democratic Party,” will be able to recruit more members and become a political force to affect the liberal voters in the April 11 elections. The DUP managed to form an alliance with the Unified Progressive Party after difficult negotiations last week to unite their supporters against the conservative ruling Saenuri Party.

The new party led by Han is expected to be supported by the voters in the Jeolla region, who traditionally supported former President Kim Dae-jung.

DUP Chairwoman Han Myeong-sook yesterday defended the party’s decision to rule out old guards from the Jeolla region. “It is not the fall of the Jeolla politicians,” she said in a discussion held by senior journalists’ association Kwanhun Club. “This is a generational change in the Jeolla region.”

She said the constituencies in the Jeolla region will still be won by the new politicians from the areas, not those from the rival Gyeongsang provinces or Seoul.

“There will be many surprise changes in Jeolla,” she said. “But it is unacceptable to say that the Kim loyalists will fall, while Roh loyalists will prosper.”

In addition to its old guards’ launch of a new party, the DUP also suffered continuing resistance by the candidates who failed to win nominations. Dozens of politicians who failed to win the DUP’s nominations in the capital region recently left the party and formed an alliance. They said they will run independently, threatening the liberals’ chances in the closely contested constituencies in Seoul and its vicinities.