Air-powered pistol gets past customs

Air-powered pistol gets past customs 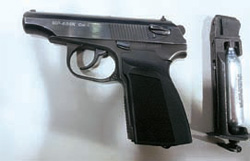 A Russian sailor made it through customs with an air-powered BB pistol before being caught by the police in downtown Busan on Sunday, revealing a glaring security breech in the management of customs’ control of foreign sailors ahead of the Nuclear Security Summit slated for the end of the month.

Three Russian crewmen arrived in the security office of the Hanjin Heavy Industries and Construction Yeongdo Dockyard in southern Busan and glided through customs showing their entry permits and passports Sunday afternoon.

They were crewmen for the 5,600-ton container ship whose engine was being repaired at the dockyard. An employee at the office simply compared the sailors’ faces with the passport photos and let them pass.

One of the crewmen, a 22-year-old sailor, was armed with a Baikal MP-654K, a semi-automatic Co2 air pistol designed for close-range target shooting.

He had kept it in a hiking bag, but the employee did not check it.

An employee of the Yeongdo Dockyard stated, “We do not inspect clothes and personal belongings, nor conduct a body search.”

According to the Busan police investigation, the Russian sailor and his two companions caught a cab after passing through the makeshift dockyard customs and headed to the Lotte Department Store in Nampo-dong, central Busan.

The 58-year-old cab driver surnamed Park saw that the sailor got out of the cab with the pistol sticking out of his back pocket and immediately contacted the police.

The three sailors roamed the bustling streets of tourist hub Nampo-dong, visiting the foreign market and underground arcades before catching a cab to return to the dockyard.

They were caught by the police at 6:35 p.m., following a stakeout in front of the dockyard entrance.

When foreign sailors arrive at Korean docks, entry permits for the boat and its crewmen need to be registered with the immigration office.

Inspection of personal belongings is up to the city’s respective customs offices.

However, from 1995, 64 dockyards nationwide, including in port cities such as Busan, Incheon and Ulsan, were given the authority to manage entry of foreign sailors.

Thus, it is up to the dockyards’ customs employees to verify the identities of crewmen entering the country and then check if they possess any illegal items such as firearms or drugs.