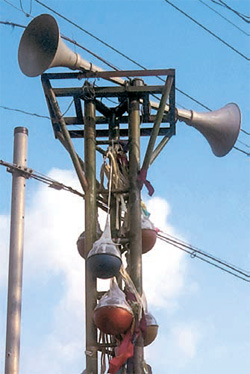 JEJU ISLAND - The protests over the naval base on Jeju Island have been going on for almost two years, and they’re taking their toll on residents of Gangjeong Village.

At 8:30 a.m. yesterday, a clamorous siren went off for more than 30 minutes from the construction site of the Jeju naval base.

“Oh my god! Stop that you bastards!” a 55-year-old resident surnamed Jeong yelled at the noise and slammed windows. “The siren is a signal that protesters will begin the rally again. I actually didn’t want the base in my hometown, but now I don’t care whether the government builds the damn base or not, I just want that sound to stop.”

The noise even hinders students. Students of Gangjeong Elementary School have to deal with the noise every day while they study mathematics or English. There are 85 students in the school and it is only 250 meters (273 yards) away from the construction site.

“We’re afraid of complaining about their protesting,” a resident told the JoongAng Ilbo. “They [protesters] consider people as betrayers and threaten them when they complain about such problems.” He added that an owner of a convenience store nearby was threatened by protesters when he told them to stop making noise.

“The rally even prevents tourists from visiting the village,” said a 59-year-old tourist surnamed Jeong. “People are yelling and attacking each other and the siren is producing terrible noises even at midnight. I brought my family because I heard that the village has a great landscape but I feel like the family trip is totally ruined.”

Meanwhile, arguments over the naval base are heating up on Web sites such as Facebook and Twitter, especially after Kim Ji-yoon, a proportional representative candidate for the Unified Progressive Party in April’s legislative elections, described the naval base as a “pirate base.”

“The real pirates are those people who produce wrong and inflammatory pronouncements about the naval base,” a netizen who identified himself as a supporter of the base development posted a message on Twitter. “People like Kim Ji-yoon just make groundless but provocative comments that create social turmoil over the country’s important political issues. The government should consider punishing those people who use this situation for a political purpose.”

Some other netizens who have visited Gangjeong Village said that the protests should be stopped, as residents of the village seem exhausted from the long-term protests.

“I have been thinking that the residents are being hurt by the government, but the protesters were the people creating the violence,” the post read.