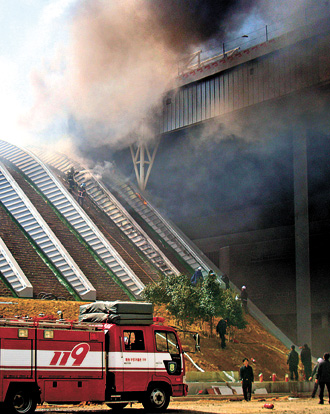 Fire engines try to extinguish a fire that broke out at around 12:50 p.m. yesterday in one of the four sections of the Yeosu Expo’s International Hall in Yeosu, South Jeolla. No casualties were reported, however, as the site was still under construction. The fire was out in 35 minutes. The police are investigating the possibility that the fire occurred during welding. The fire comes less than two months from the official opening of the Expo slated to take place from May 12 to Aug. 2. The preparation committee had aimed to complete construction of the hall by the end of this month. [NEWSIS]