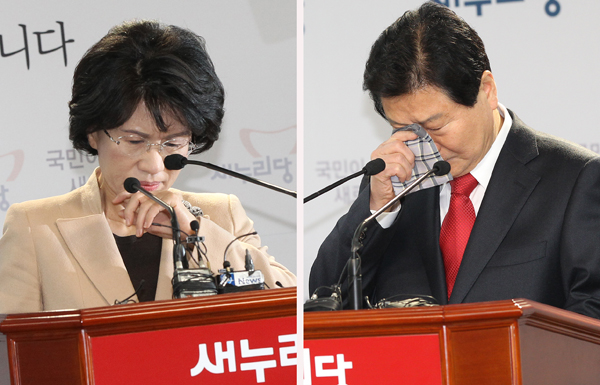 
Both ruling and opposition parties have withdrawn nominations of some controversial candidates, as skeletons in their closets were belatedly revealed by the public or media after the candidacy announcements.

The liberal opposition Democratic United Party said yesterday its Supreme Council has decided to withdraw the nominations of two of its candidates over their alleged involvements in graft scandals.

Former lawmaker Lee Hwa-young, who was named to represent the party in the Donghae and Samcheok cities of Gangwon, lost his candidacy as he was indicted last month on charges of receiving bribes from the now-suspended Jeil Mutual Savings Bank.

An incumbent lawmaker, Representative Jeon Hae-sook, also lost her candidacy in Seoul’s Gwangjin A District. She was accused of giving bribes to executives of the area’s hometown friendship association.

“The party had an internal probe, and some circumstantial evidence was seen that she had provided bribes,” a party official said. “It was unavoidable for us to withdraw the nomination.”

Although Im Jong-seok, the DUP secretary general and nominee for Seongdong B District, stepped down from his post and surrendered his nomination last week over his bribery conviction, it was the first time for the DUP to forcibly remove nominations of its candidates.

The conservative ruling Saenuri Party also canceled nominations of two candidates earlier this week. On Wednesday, the party said it decided to drop two candidates who were slated to represent strongholds in Seoul’s Gangnam A and B districts.

Park Sang-il, head of technology company Park Systems, was nominated as the ruling party’s candidate in Gangnam A District, but his book, published last year, has recently become a topic of controversy. In it, Park compared the Korean independence troops rallying against Japan’s colonial rule as a small, armed group of terrorists and described their activities as sporadic terrorist attacks.

Lee Young-jo, a cohead of the civic group Citizens United for Better Society, was the party’s candidate in Gangnam B District, but his English paper published in 2010 became an issue. The paper, written when Lee was the head of the Truth and Reconciliation Commission, described the 1980 Gwangju democratization movement as “popular revolt,” drawing criticism.

While the Saenuri Party will reconsider some of its candidates, its internal rift appears to have subsided as Lee Myung-bak loyalists who failed to win nominations agreed to accept their fates and support the party’s campaign.

“Whatever decision the party makes over my nomination, I will accept it,” Representative Ahn Sang-soo, former head of the ruling party, said in a press conference yesterday. “I was tempted to leave the party and run independently or create a new party, but I cannot take that path because I fought for 16 years to defend this party.”

Speculations were high that Ahn wouldn’t win nomination, as the party decided to make a strategic nomination in Ahn’s constituency.

Another key Lee loyalist, Representative Chin Soo-hee, held a press conference and said she won’t seek reelection. “I once thought about leaving the party and running independently because I could not accept the nomination review outcome,” Chin said. “But I cannot leave the party that made me a two-term lawmaker and a welfare minister.”

After Lee loyalists were largely eliminated, concerns grew that they would leave the party en masse to run independently or to create a new party. The fear of the possible exodus, however, subsided after Representative Kim Moo-sung, former floor leader of the ruling party, announced his decision on Tuesday to accept the nomination outcome and to support the ruling party’s campaign. The other disgruntled politicians largely followed Kim’s move.