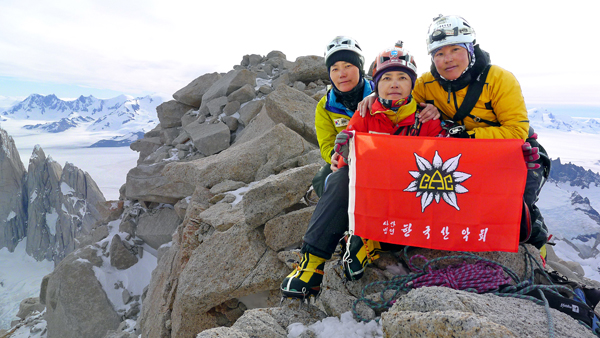 Lee Myung-hee, Han Mi-sun and Chae Mi-sun have been climbing together since 2006. The three said that this familiarity with each other’s strengths and weaknesses helped them successfully climb one of the most technically challenging mountains in the world.

“It was easy to be aware of each other’s strengths and rhythm since we are all women,” Lee said in a phone interview with the JoongAng Ilbo on Monday. “And most importantly, we had the same philosophy about climbing mountains.”

Mount Fitz Roy has a 1,050-meter-long vertical rock face that is only climbable during two months of the year. The expedition team waited 20 days before they started the climb due to heavy snowfall. 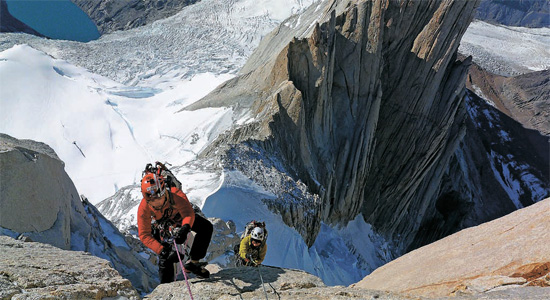 “We had to try three times to climb the mountain due to bad weather,” Lee said.

With the financial support of the Corean Alpine Club, the three started their expedition at the Rio Blanca base camp and arrived at the summit of Mount Fitz Roy in only three nights and four days.

It was a much harder expedition for the team since they used an Alpine-style mountain climbing technique that does not use guides, fixed ropes, fixed camps or supplemental oxygen. For such reasons, Alpine-style climbers typically have a low chance of reaching the peak.

In order to lighten their load during he climb, the expedition team did not carry a tent or a sleeping bags, but instead brought only two 60-meter ropes, a small amount of food and a rock that was used to mark where they were every 60 meters.

To climb the mountain as quickly as possible, the team did whatever it could to save time, including skipping out on setting up camp for rests.

“For the first two days when we were climbing the upper section, we slightly leaned against the rock and took a nap,” Chae said.

The team also said they ate ice rather than the typical process of boiling water.

“Although it required a lot of physical strength, we are all happy that we made it to the top,” Lee said.

Their accomplishment has become a hot topic of discussion throughout the local mountaineering community.

Their journey ended March 10, when the team returned to Korea. The three said they are more than ready to spend time with their families.

“Each time I leave home for the expedition, I worry about my son the most,” Lee said. “However, my son reassures me by saying ‘Have a safe expedition.’?”