North says it will launch satellite into orbit in April

North says it will launch satellite into orbit in April 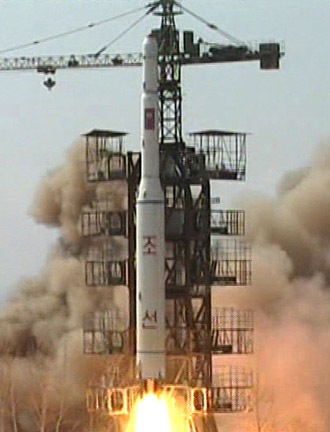 In this April 5, 2009, file photo taken from KRT video, the Taepodong-2 lifts off from its launch pad in Musudan-ri, North Hamgyong Province. [YONHAP]

North Korea announced yesterday that it plans to launch a satellite into orbit aboard a long-range rocket next month, just two weeks after agreeing with the United States to halt nuclear and long-range missile tests in exchange for 240,000 metric tons of food aid.

The technology to be used in the launching of the “earth observation satellite” has previously been condemned by the United States and the United Nations Security Council as a cover for testing intercontinental ballistic missiles.

According to The Associated Press, the U.S. Department of State said North Korea’s planned rocket launch is “highly provocative.”

“Such a missile launch would pose a threat to regional security and would also be inconsistent with North Korea’s recent undertaking to refrain from long-range missile launches,” State Department spokeswoman Victoria Nuland said in a statement.

North Korea’s official Korean Central News Agency released a statement issued by the Korean Committee of Space Technology declaring that the regime will launch the satellite Kwangmyongsong-3 to celebrate the centennial of the birth of founder Kim Il Sung.

“Marking the 100th anniversary of great leader and comrade Kim Il Sung, we come to launch a practical satellite manufactured by our own techniques and powers,” the statement read.

“The Kwangmyongsong-3 is an earth-observing, polar-orbiting satellite, and it will be blasted off southward using carrier rocket Unha-3 from a launch pad in Cholsan County, North Pyongan Province, between April 12 and 16.

“We arranged a safe flight orbit so that debris generating from the carrier rocket does not have any impact on neighboring countries during the flight,” the statement read.

“The launch of earth-observing satellite Kwangmyongsong-3 will strongly encourage our military and people to push ahead with the establishment of a strong, prosperous nation and become an important opportunity to bring our regime’s peaceful use of space technology to a new level.”

In the statement, the regime pledged to abide by “all of international regulations and customs regarding the peaceful launch of a scientific, technological satellite” and “guarantees the transparency of the firing.”

The South’s Ministry of Foreign Affairs and Trade issued a statement yesterday following the announcement.

“The government now expresses serious concerns about North Korea’s plan to launch a so-called 'practical satellite'” the statement read. “If the North fires the ‘practical satellite,’ it apparently violates UN Security Council Resolution 1874 and becomes a crucial provocation threatening peace and security on the Korea Peninsula and in East Asia.

North Korea fired its first satellite, Kwangmyongsong, in 1998, which was viewed as a long-range missile test and called Taepodong-1 by the international community.

The North launched the first stage of the Taepodong-2 in 2006 and completed the second stage in 2009.

The latest Taepodong-2 failed to reach orbit, according to the United States and the South, flying only 3,200 kilometers (1,990 miles) and falling into the Pacific Ocean.