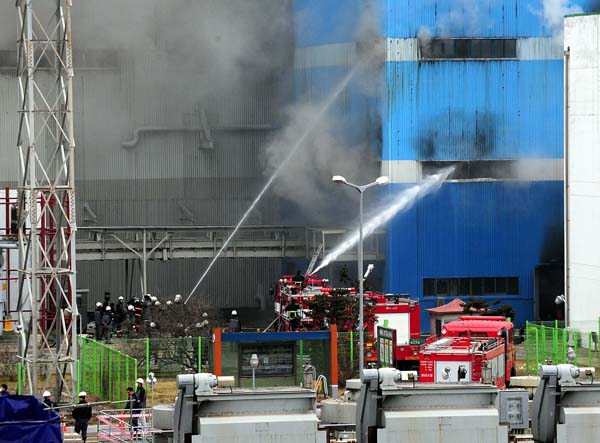 Firefighters attempt to extinguish a fire at the Boryeong Thermal Power Plant in South Chungcheong yesterday morning. The fire damaged two of the eight fuel generators at the country’s largest thermal power plant. By Kim Seong-tae 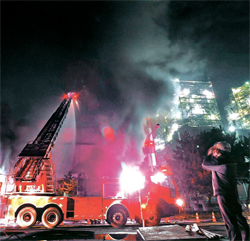 According to the Boryeong City Government, electricity supply cables connected to the turbine control rooms for the No. 1 and No. 2 fuel generators caught fire in the basement of a building at the Boryeong Thermal Power Plant at 10:30 p.m.

Some 400 firefighters and 30 fire trucks were dispatched immediately from surrounding cities and counties, including Boryeong and Hongseong County. Firefighters battled with the flames until around 10 a.m. yesterday morning.

The city government said no one was killed or injured in the fire. A short circuit of the electricity cables was the most likely cause of the fire, officials said. 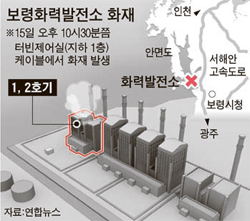 The Boryeong plant - which accounts for 8 percent of the country’s power generating stations - has suspended the damaged generators, raising anxiety that blackouts may occur in South Chungcheong.

Officials said they are maintaining a reserve rate of 22 percent to avoid power outages.

Toxic gases and smoke emerged from the basement and first and second floors of the facility until late yesterday. Firefighters were trying to put out embers that may spark fires on the third and fourth floors of the building via electrical wiring.

“When we arrived at the facility, clouds of smoke were coming out from the basement of the building and we were barely able to put out the flames,” a firefighter told the JoongAng Ilbo. “Though we put the fire out, a numbers of small embers spread to electric cables that are connected from the basement to the third and fourth floors. In a situation like this, it is hard to predict when an additional fire occurs.”

Officials at the power plant told the JoongAng Ilbo that they called 119, the emergency number for firefighters and ambulance services, at 10:48 p.m., 18 minutes after the fire broke out.

“The fire alarm worked fine, but we just wanted to make sure that it was not a malfunction,” said Park Hyung-goo, an executive official of the power plant. “We tried to put out the fire with our own manpower for the first few minutes.”

Each fuel generator produces around 500,000 kilowatts of electricity.