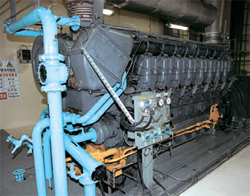 The Nuclear Safety and Security Commission is conducting a thorough investigation into the country’s oldest nuclear reactor, Gori-1, which was found on Tuesday to have temporarily lost power in February.

The commission, which monitors safety conditions at the nation’s nuclear facilities, said that the inspection will take about a month. Though the reactor is now operating normally, the commission had suspended Gori-1 for an inspection on Wednesday.

Experts said that the commission’s decision is very rare, as most nuclear facilities have been allowed to begin operating again within one or two weeks if problems are fixed.

“The Gori-1 accident has proven the need for the commission,” a nuclear power generation expert, who requested anonymity, told the JoongAng Ilbo. “When the commission was established, many people questioned why the government developed the agency, but this is a chance for them to show what they can do.”

Prior to that, surveillance and business projects for nuclear facilities had been overseen by the Ministry of Education, Science and Technology. But civic groups and nuclear experts pointed out that an independent agency to monitor facilities like the Gori reactor was needed.

“We will not hesitate to take the necessary actions because not doing so could result in a serious safety problem,” Sohn Jae-young, an executive of the Nuclear Safety and Security Commission, told the JoongAng Ilbo.

The commission said that Mun and several officials of the power company held a secret meeting in order to conceal the loss of power at the Gori-1 reactor in February.

According to the security commission, Mun testified that he is responsible for the cover-up.

“I was the one who decided not to report the case to the commission and the government,” Mun said during an inquiry organized by the security commission.

Officials at the power company have confirmed that Mun and executive-level officials intentionally left the incident out of a daily work report filed by facility managers because they did not want to spread fear to people outside the corporation.

The commission said that it will continue to expand the investigation.

“If we find additional people who were involved in concealing the incident, we will not hesitate to punish them,” a spokesman of the commission told the JoongAng Ilbo.

The Gori-1 reactor, the oldest of five at the Gori Nuclear Power Plant, experienced a complete power failure for 12 minutes starting at 8:34 p.m. on Feb. 9.