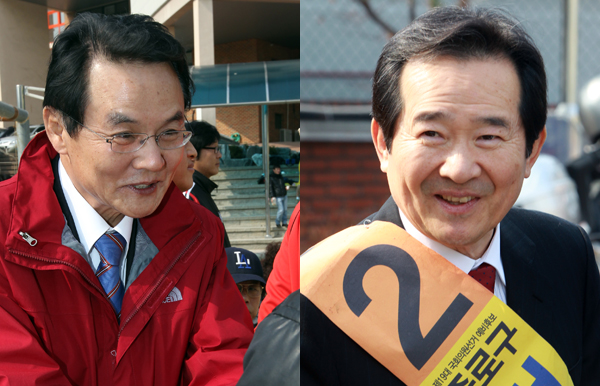 As one of the most competitive races in the April 11 legislative elections unfolds in Seoul’s Jongno District, Representative Hong Sa-duk, the ruling Saenuri Party’s candidate for the constituency, left, and Representative Chung Sye-kyun, the Democratic United Party candidate for the district, meet with voters yesterday. The titans will clash in the constituency often known as the bellwether of Korea’s politics. As of yesterday, the conservative ruling Saenuri Party completed nominations in 231 constituencies around the nation. The Democratic United Party and the Unified Progressive Party held primaries at 64 constituencies nationwide to complete their liberal alliance and finalize the nomination. [YONHAP]