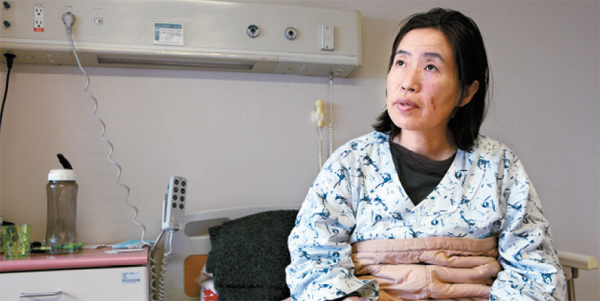 Lee Ae-ran, a North Korean defector who staged an 18-day-long hunger strike in front of the Chinese Embassy in central Seoul in protest of China’s forceful repatriation of escapees from the regime, is hospitalized at Asan Medical Center in eastern Seoul after she collapsed from exhaustion. By Park Sang-moon

As part of the desperate efforts to save North Korean defectors at risk of being forcibly repatriated to their homeland and punished, Lee Ae-ran, a female North Korean defector, staged an 18-day hunger strike in front of the Chinese Embassy in central Seoul and subsequently collapsed from exhaustion.

Lee, who is a professor of nutrition and culinary arts at Kyungin Women’s College, is known as the first North Korean defector to obtain a doctorate degree in the South. Even though she was exhausted from the extensive protest, Lee said she won’t stop until the deadly repatriations end.

“I don’t think this matter will be resolved by a short-term protest by a group of people,” Lee told the Korea JoongAng Daily from the Asan Medical Center in eastern Seoul, where she was hospitalized last Wednesday.

“We will do this until we see an achievement.”

In protest of China’s unchanged position in hunting down North Korean escapees, a string of rallies, hunger protests and a concert were held in Seoul. A group of South Korean lawmakers even flew to Geneva to raise the issue at a UN meeting.

However, Lee said she was surprised that the South’s liberals and left-winged politicians, who have consistently fought for human rights, are keeping mum on the issue. She said it’s ironic given their previous protests for human rights in general.

“The liberals, who maintain that human rights are a universal right of people around the world, don’t say a single word about human rights of North Korean defectors,” Lee said. “The North Korean regime is killing those escapees it sent back. Isn’t it a matter of human rights?

Lee also mentioned the liberals’ protests to protect salamanders in 2003. At the time, liberal activists, a monk and environmentalists opposed the government’s construction of a tunnel for the KTX bullet train near Mount Cheonseong in South Gyeongsang, arguing the construction would ruin the habitat of salamanders living on the mountain.

The government was forced to halt construction for six months and resumed in 2006.

“They once harshly protested for salamanders put at risk by the government’s KTX construction,” Lee said. “Are the lives of salamanders more important than those of defectors?”

In fact, the issue of China’s forceful repatriations is nothing new to the South and China. The number of North Korean defectors to South Korea has constantly increased, according to the Ministry of Unification, reporting more than 20,000 in total. Considering the unknown statistics of those fleeing to other countries, the number is expected to be higher.

In dealing with the massive number of defectors, many activists say the South maintained its position dubbed “quiet diplomacy,” asking China to release defectors through behind-the-scenes contact in order to refrain stimulating the North in the midst of frosty inter-Korean relations.

Many experts, including UN Secretary General Ban Ki-moon, advised that matters of North Korean defectors would be better resolved quietly instead of open to the public.

However, the issue was surfaced by Representative Park Sun-young of the Liberty Forward Party, who claimed that a group of North Korean defectors detained in China asked her to rescue them from repatriation. Additionally, some activists, including Lee, said that kind of so-called “quiet diplomacy” is not a fundamental solution anymore.

“What did the ‘quiet diplomacy’ resolve on the issue of North Korean defectors?” she said. “There’s no breakthrough in resolving North Korea’s food crisis, reducing the number of escapees and improving the livelihood of North Korean people.

“During the former administrations under the Sunshine Policy, the number of defectors was still increasing constantly, and they were constantly repatriated, and then died,” she said. “In 1997, when I defected from the North, around 10 people in the prison camp died of hunger every day, and I was told by those who recently escaped there that the situation is getting worse in the regime due to the currency reform in 2009.”

Many defectors have witnessed that those arrested in Chinese territory will face harsh punishment including open execution, given the fact that heir Kim Jong-un reportedly ordered border security guards to hunt down escapees and “eradicate” three generations of their families.

After Park’s public statement, a group of celebrities held a concert dubbed “Cry With Us” with defectors in the South, attracting public attention on the issue. Two ruling lawmakers and Representative Park flew to Geneva and appealed the issue to the UNHCR to raise international awareness. President Lee Myung-bak also officially requested the release of defectors to the Chinese foreign minister.

However, in the midst of rising domestic and international attention on defectors, liberal politicians and activists remain relatively passive in joining the movement, compared with their actions in support of feminism, labor strikes, immigrant workers and even the ordinance of students’ rights.

The main opposition Democratic United Party has only issued a commentary saying they “feel sorry” for those repatriated and urged China to stop. Liberal activists and politicians haven’t held a single rally on the issue so far.

Conversely, it’s mostly conservative, anti-North, or religious groups advocating for the human rights of North Korean defectors in the South.

On a chilly, rainy day, around 40 Christians staged a rally in front of the Chinese Embassy in central Seoul last Wednesday, along with hawkish, right-winged activists who were upset with China’s collaboration with North Korea in dealing with defectors. The embassy was barricaded by a string of police buses to prevent them from approaching the building.

“I am a veteran of the marine unit that suffered the Cheonan naval ship’s sinking,” an elderly military man shouted.

“It is terrible that those leftists follow the North Korean regime.”

Beside the rally, there was a small, humble tent where a group of citizens and activists were staging hunger protests against China. That was where the hospitalized Lee protested and they were following her move.

“There are no opposition lawmakers or liberal activists who visited here to encourage us,” Kim Chun-seong, a North Korean defector and missionary who was staying at the tent, said. “This issue could have a negative impact on the opposition party’s victory in the upcoming general election.”

Another activist who didn’t give his name also said, “I support their protests, such as joining the labor strike of Ssangyong Motors. However, I was wondering if it could be called ‘progressive’ when they are turning their faces from dying North Korean defectors.”

Amid criticism of the ruling Saenuri Party, some DUP lawmakers and liberals raised the issue. Cho Kuk, a high-profile law professor at Seoul National University and a popular liberal, posted on Twitter, encouraging citizens to give attention to the issue.

However, no opposition parties have taken official action yet.