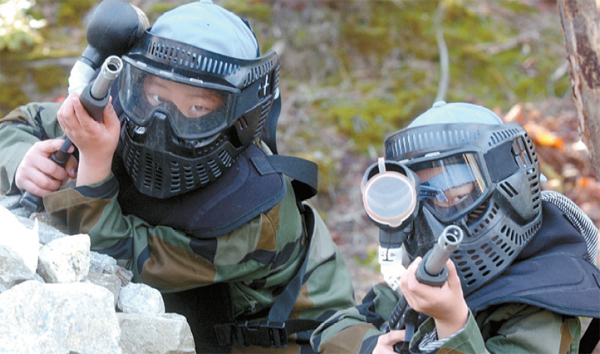 In this file photo, young paintball players take aim. Complaints grew recently that the police were cracking down on the survival game players’ clubs ahead of the Nuclear Security Summit next week. [JoongAng Ilbo]


A 40-year-old surnamed Kim recently gave up his membership from a survival club that he attended monthly as a hobby.

He quit after the social club was investigated by the police ahead of the approaching Nuclear Security Summit.

The club was investigated for possession of illegal weapons and suspicion of weapons trading. The police even searched the man’s house after he posted a photo of a replica gun on the club’s online blog.

“I decided to stop playing survival games because I was frustrated at the police for treating me like a criminal,” he said.

Another member of a survival game club surnamed Oh, who previously served as a Navy sergeant, recently received a call from the police on suspicion that he “leaked military information” while discussing an imitation grenade with his fellow club members.

Though Oh told the police that the grenade was only an imitation, he was asked to appear for police questioning. In the end, he quit all activities related to the club and deleted postings he had put up on the club’s blog.

Members of friendship associations of paintball survival games are expressing frustration as law enforcement authorities are cracking down on them ahead of major international events.

They are complaining that they are treated as potential criminals. Currently, there are around 50,000 members of survival game clubs. The clubs often involve paintball, laser tag and target shooting with air-powered guns.

With the Nuclear Security Summit approaching next week, the police have been intensifying its security measures, including cracking down on imitation firearm possessions, as a move against potential terrorism.

Those who enjoy playing the survival games, however, are complaining that the current law governing them is very vague and are calling for an amendment. The current law gives the police authority to clamp down on club members as the law states it is illegal to carry materials that look “very similar” to guns. Members complain that since the law is ambiguous, the police are cracking down on their activities only ahead of major international events.

“I’m considered a potential criminal whenever there is a big event coming up,” said a 28-year-old surnamed Jung. “I find this very unfair.”

Jung added the government should clarify related laws and punish those who carry real guns and not those that only have replicas.