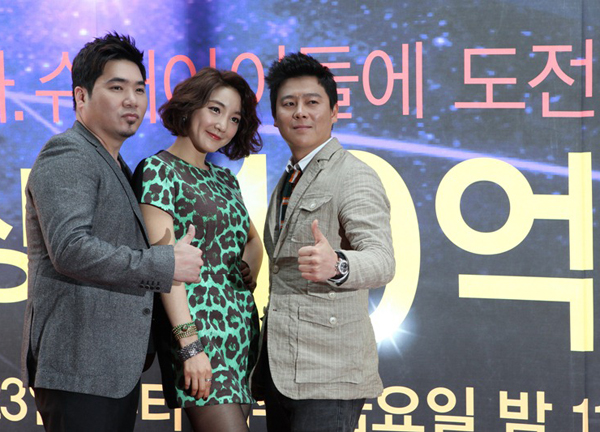 
Brace yourself, there’s another singing competition coming to town. But this show is also making stops in Thailand and China on its way.

In an unprecedented move, the producers of the new KBS program “Global Super Idol” will scour Asia in a bid to find the next K-pop superstar.

There will only be one winner, who will claim a prize of 700 million won ($622,300). But the winner and three or four runner-up contestants will form a group. Together, they will receive 300 million won toward their first album. The group will be managed by Core Contents Media, of T-ara and Davichi fame

“One thing that worries us at the moment is that once the winner is given the prize money, they will no longer be interested in working,” Lim Yong-hyun, the content producer of the show, joked during a press conference for the new show last week.

The selection of the judges was a big part of the show’s creation, the producers said.

The three judges are all members of the first generation of K-pop groups during the 1990s: Bada, the lead vocalist of the girl group S.E.S., Lee Jae-hoon of the group Cool, and R&B singer Kim Jo-han, of the boy band Solid.

“All of us have been with our bands for more than 10 years,” Lee said. “So we will be able to share our knowledge of what it takes to be part of a team.”

Lee added that a person doesn’t need to be the best singer in order to be part of a group, as long as they are able to bring something unique to the dynamic.

To date, 3,000 Thai, 1,000 Chinese and 700 Korean star hopefuls have flocked to the regional auditions, which were held in the respective countries and attended by the show’s producers.

With just days before the first episode airs this Friday, there are 30 contestants left to battle it out for a spot on the show. With a lucrative grand prize and a place in a pop group at stake, the competition is tight.

There are a few unknowns that should keep viewers tuning in until the show’s end. Producers have left open the number of runners-up in the winning group, though they have said the group will likely comprise four or five members. The nationalities in the group and its gender composition will also be unknown until the winners are announced.

“From the outset, the program sounded epic, and I knew I had to participate,” Kim Jo-han said during the press event.

The judges said that dealing with foreign contestants brought its own set of challenges, especially where language was concerned.

“The pronunciation of Korean words was a crucial part of the selection process, as singers will need to sing in Korean,” Kim said. “A candidate’s accent should be undetectable when they’re singing.”

Edging out the competition

Singing-audition programs have been done to death, especially in Korea, where just this year, there will be eight shows across broadcast and cable networks in addition to “Global Super Idol.”

The lineup includes: “The Voice of Korea,” “Superstar K,” “The Great Birth,” “K-pop Star,” “Made in U” and “Korea’s Got Talent,” along with two upcoming shows, “Musical Star,” which aims to discover the next musical theater star, and “Super Diva,” a singing competition for homemakers.

One thing that these shows have in common is that none has been able to guarantee the contestants’ ongoing success after the season ends.

Take Huh Gak for example, who came from behind to win the second season of “Superstar K” in 2010. Although he is pursuing a career as a singer with intermittent releases of songs, the program couldn’t give him a fan base equal to that of K-pop mega-groups such as 2PM or Girls’ Generation.

That is something the producers of “Global Super Idol” said they are aiming to ensure will not happen with the group that wins their show.

To ensure the group’s ongoing success, the producers said that they’ve hired a group of experts, including a choreographer, music video director, fashion designer, jewelry designer and even a dentist to help the band distinguish itself in the global pop market.

Producers also said they expect that the varied ethnicities of the contestants will give the group a broader playing field.

“Chinese and Thai networks have already agreed to promote the band,” Lim said.

One of the big draws of the show will be the presence of the three former K-pop lead vocalists, and according to Bada, the judges aim to “discover the next big Korean idol group, which will be even bigger than S.E.S. at its height.”

The 32-year-old singer added, “Our job will be to act as the rocket boosters that fall off the satellite when it leaves the Earth’s orbit.”