How to cut overtime nation’s work

How to cut overtime nation’s work 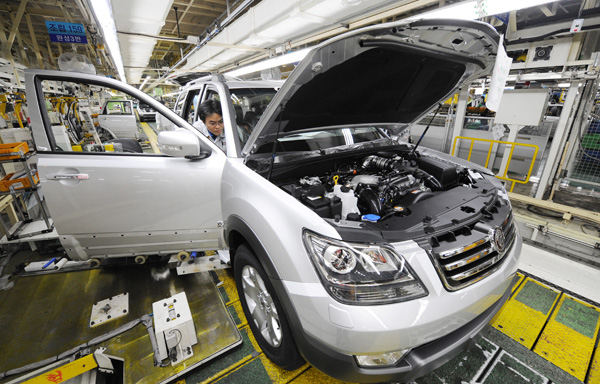 A Kia Motors employee works on an assembly line in a factory in Hwaseong, Gyeonggi. Automakers are expected to be most affected by the government’s plan to reduce working hours by including work on holidays as overtime.


Korea is notorious for having the longest working hours in the developed world. According to the Organization for Economic Cooperation and Development, Koreans worked 2,193 hours on annual average, including overtime, as of 2010. It is the only OECD country in which people work more than 2,000 hours a year on average. This is a sharp contrast from the Netherlands’ 1,377 hours and Germany’s 1,419 in the same year.

Under the concept of “job sharing,” the government is trying to reduce work hours and encourage companies to hire more workers to spread the work around. The labor ministry intends to present an amendment to the National Assembly in June, but businesses oppose the idea, saying cutting working hours and hiring additional workforce adds to their costs.

However, since work on holiday is not counted as overtime, employees can easily surpass the 52-hour limit. Lee’s proposal would stop that.

“If work on holidays is included in overtime, it would not only solve workers’ health problems but also create new jobs,” Lee said. “The country has working hours as long as 68 hours a week. We’re going to discuss amending related laws at the Economic and Social Development Commission.”

Lee said reduced working hours and job sharing together would add 250,000 jobs in the country.

However, companies don’t want the extra expense. Workers themselves may like the “job sharing” idea at the start, but could end up getting paid less in total.

“Job sharing can not only increase costs for businesses but also reduce wages for workers,” Korea Employment Federation said in a recent statement. “Those who work on weekends could lose as much as one third of their pay and it is questionable whether workers will embrace the change.”

The Korea Chamber of Commerce and Industry and the Federation of Korean Industries are against the so-called job sharing.

“The existing workforce may resist job sharing because it would lead to wage cuts,” said Park Jong-nam, a senior executive at the chamber. “This could again add pressure on companies to increase wages.”

“Creating jobs by reducing working hours could impose a significant burden on businesses,” said an official at the Federation of Korean Industries. “The automobile industry in particular could be hard hit because labor accounts for a large portion of their costs.”

Last year, the labor ministry studied working conditions in the automotive industry and the working hours for employees of Hyundai Motor ranged from 46 hours to 64 hours.

Hyundai Motor and its sister company Kia Motors have 12-hour day and night shifts but they are eliminating night shift and adopt two day shifts beginning next year. The two companies said they would hire 1,400 additional employees to bring about the change.

Korea’s auto industry has chronic problems with long working hours and overtime. Last December, an 18-year-old high school trainee, who worked for four months at Kia’s factory in Gwangju, collapsed with a brain hemorrhage. The trainee worked as long as 72 hours a week, which is 20 hours more than the 52-hour legal maximum. That factory’s 435 workers, as well as over one hundred trainees at the factory, worked more than the legal limit every month.

“There are few developed countries where work on holidays is not included in overtime,” said Bae Kiu-sik, a director of industrial relations and social development at Korea Labor Institute.

“The fact that work on holidays is not included is absurd,” he said. “It is belated but we need to change it.”

In response to worries over potential decline in wages resulting from job sharing, Lee said, “Working hours need to be reduced but productivity should rise at the same time. Wages are now linked to the length of working hours. Koreans work longer than those in developed countries but productivity is lower.”

The country’s two leading umbrella labor unions say they basically agree to the idea of cutting working hours by including work on holidays in overtime but they are worried that companies may try to make their employees work harder during shortened work hours.

In order to compensate workers for reduced wages, Hyundai’s labor union said companies should adopt monthly wages rather than pay workers hourly. According to Kwon O-il, a spokesman at Hyundai’s labor union, basic wages account for only 40 percent of what autoworkers receive monthly. The remaining 60 percent is in overtime payments.

“The current hourly system is outdated and companies should switch to monthly wages,” said Kwon.