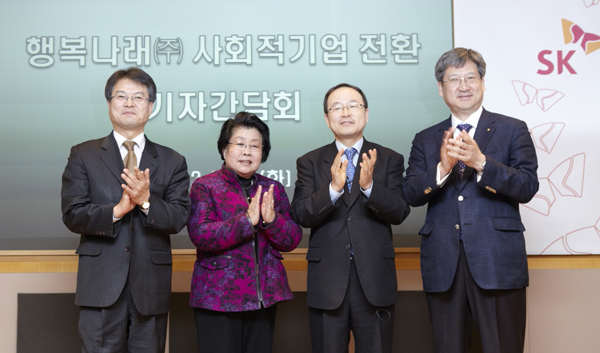 Happy Narae CEO Kang Dae-sung, third from left, poses with three outside executives at a ceremony to mark the launch of the largest social enterprise by SK Group at its headquarters in central Seoul yesterday. Provided by the company


The third-biggest conglomerate in Korea introduced Happy Narae, a new social enterprise that will employ workers who might otherwise have trouble finding a job, at a press conference held at its headquarters in central Seoul yesterday. 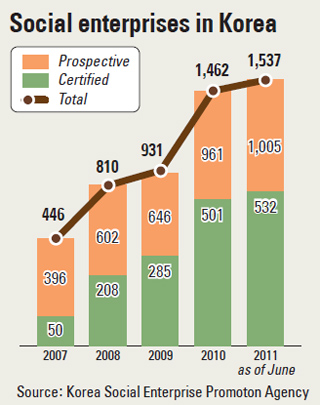 It is a new model for CSR activities of large businesses, the group said.

A social enterprise is aimed at serving the public interest. It employs the elderly, people with physical disabilities and foreign immigrants, and returns profits to the society through various projects and channels.

The new social enterprise is a former subsidiary of SK, which was called MRO Korea that in the past provided office supplies like A4 paper, pens and ink toner to its subsidiaries. Its annual sales recorded over 120 billion won ($106.62 million) as of last year. About 60 percent of the company’s profits came from transactions with SK subsidiaries, while the remaining 40 percent was earned from contracts with non-SK companies, it said.

SK Chief Chey Tae-won decided to turn the maintenance, repair and operations (MRO) unit into a social enterprise last year, avoiding criticism leveled at conglomerates conducting the MRO business when it is widely categorized as a territory for small and medium-size companies.

Happy Narae CEO Kang Dae-sung unveiled three goals of increasing their business with other social enterprises, hiring more disadvantaged members of society and returning two-thirds of its profits back to society every year.

“We currently purchase materials from 20 social enterprises that are smaller than our firm, and plan to increase the number to 50 by the end of the year,” Kang said.

Happy Narae has already hired 10 new workers, including those from single-parent, multicultural families and the elderly. It plans to employ five more from these groups this year.

Kang also pledged that Happy Narae will not receive any subsidies for labor costs from the government. However, the company will be exempted from paying corporate taxes on the pretext of serving society.

“It is better to receive tax exemption benefits in order to maximize our profits so we can dole out more benefits to people,” Kang said.

“There have been an increasing number of social enterprises, but most of them are too small and not sustainable at all.”