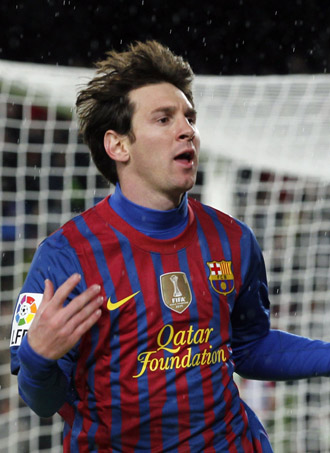 BARCELONA, Spain - Lionel Messi now has a prized record to show that he is arguably the best player to ever don Barcelona’s burgundy and blue shirt.

The forward wrote his name into the club’s history in emphatic fashion on Tuesday with yet another hat trick to become the club’s all-time leading scorer with 234 goals.

“We are before the best player in absolutely every facet,’’ Barcelona coach Pep Guardiola said. “He is capable of everything that a football player must do and he does it every three days.

“I am sorry for those who want to dethrone him, but he is simply different from all the rest.’’

Messi netted his 18th career hat trick for the Catalan giants to break Cesar Rodriguez’s record of 232 that had stood for 57 years, resisting the best efforts of the other greats that have made their names at Camp Nou Stadium.

And while Rodriguez set the mark in 13 seasons from 1942-55, the 24-year-old Messi needed just under eight campaigns to pass his milestone.

“Messi has entered the history of the club at just 24 years of age,’’ Guardiola said. “If he continues like this in the coming years, he will score so many goals that he will never be surpassed.’’

Guardiola said that Messi is to football what Chicago Bulls great Michael Jordan was to basketball.

“Jordan dominated his sport and Messi dominates this one,’’ the former midfielder said. “The first thing about Messi to point out is his mentality. He has great quality, of course. But the important thing is his mental strength.’’

Messi’s latest scoring performance led Barcelona to a tougher-than-expected 5-3 win over a pesky Granada in a game his team could not afford to lose if it wanted to stay in the hunt for a fourth straight Spanish league title.

The Argentina international fired in a cross by Isaac Cuenca in the 17th minute to match Rodriguez’s record, and then added two more off passes from Dani Alves to secure the win after Granada had come back to pull even at 2-2.

Messi, the three-time world player of the year, has scored 54 goals in all competitions this season, including a Champions League record of five goals in one game just under two weeks ago.

Always the rival defense’s main worry, Messi - nicknamed “The Flea’’ for his slight frame and headlong, goal-bound bursts - has proven unstoppable of late, scoring 17 goals in a seven-game scoring streak. His hat trick against Granada means he leads the Spanish league in scoring, putting him two ahead of Real Madrid’s Cristiano Ronaldo in their personal scoring duel.

“He is defining an era. He is the best,’’ Barcelona goalkeeper Victor Valdez said of his teammate.

Barcelona’s sixth consecutive win cut leader Real Madrid’s advantage to five points ahead of its game at Villarreal on Wednesday.

“Messi was calm as always after the game and thanked us all for our efforts,’’ said Cristian Tello, who also scored for Barcelona. “I have no doubt that he will end up as the best to have ever played this sport. Each game he shows that he is on another level.

“He doesn’t stop surprising us.’’

Barcelona previously believed that Rodriguez had scored 235 goals in 13 seasons between 1942-55. But after a thorough review by the club and La Vanguardia newspaper, the tally was lowered by three goals. AP