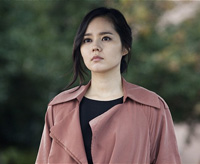 The film tells the story of two students who meet in an introductory architecture class and fall in love. The story unfolds 15 years later after the female student tracks down her first love to seek his help in building her dream house.

After separating from her husband, Seo-yeon (Han Ga-in) decides to build a house on Jeju Island so that she can live with her dad, who is severely ill. The architect she calls is Seung-min (Uhm Tae-woong), her first love. The two met and fell in love in an introduction to architecture class in college, when Seo-yeon told Seung-min she wanted him to help her build her dream house someday.

Seung-min builds her a model of the house and prepares to propose, but things don’t work out as planned and the two part ways.

When they reunite 15 years later, Seung-min works hard to match every detail of Seo-yeo’s dream house. In the process, they soon find themselves rekindling old memories and romance.

This film is being touted as one of the first historical films of the year, following the success of last year’s hits “Detective K” and “War of the Arrows.” It is based on historical fact, but adds fictional elements inspired by the king’s well-known love of coffee and the conspiracy theories surrounding Gojong.

The story begins as Gojong (Park Hee-soon) decides to temporarily move to the Russian legation after Empress Myeongseong is assassinated by the Japanese army. While there, he tastes coffee for the first time and becomes a fan of the bittersweet beverage.

Meanwhile, two Russians, Illichi (Joo Jin-mo) and Danya (Kim So-yeon) arrive in Korea after fleeing their country, where they stole coffee and gold.

Danya becomes the country’s first barista, making coffee for the king. Illichi becomes a spy to protect Danya, who has begun to fall for Gojong.

With the Russian army still hot on their trail, Danya and Illichi become ensnared in a plot to assassinate Gojong that is orchestrated by Sadako (Yu Sun).

The film seems eager to appeal to modern viewers with its focus on coffee and the costuming of the king, who is often seen wearing classic Western suits instead of the royal red robes that were emblematic of his time.

The film is based on a novel written by Kim Tak-hwan, who also wrote the novel “Detective K” is based on, and is directed by Jang Yoon-hyeon, who has won praise for his films “Contact” and “Tell Me Something.”

If you’re in the mood to watch Steven Seagal act like his signature thickheaded self over and over again, then “Kill Switch” might just be for you. If not, at least have several drinks first. This 2008 direct-to-video movie must have found some following, as it was eventually put out for theatrical release, but it’s unclear who those fans are exactly.

Most Seagal flicks aren’t known for Oscar-quality acting or production, but rather, it’s the big cheese’s antics that draw in viewers. At first, “Kill Switch” seems to follow the tried-and-tested formula, giving it a fighting chance at mediocrity.

Seagal’s character, Jacob King, is a police detective haunted by a childhood memory of his brother being killed at a birthday party while playing outdoors. To avenge his death, Jacob devotes his life to capturing serial killers, though obviously it’s not his sophisticated detective work but his penchant for beating information out of the riffraff that makes him successful.

There’s a goody two-shoes who tries to ruin the fun in the form of an FBI agent named Frankie Miller (Holly Elissa), but what could potentially be a more intriguing tension never really develops between the two characters, even as Jacob’s investigations come under more scrutiny.

So, as true Seagal addicts will attest, we’re left with focusing on the fight scenes to really make the movie worth watching. But an awkward filming technique ruins even those, according to critics, leaving truly no saving grace.

Up-and-coming director Josh Trank brings us a film about three Seattle high school students who receive telepathic superpowers from an unknown glowing object. It’s all horseplay and practical jokes for the giddy teenagers until the most troubled among them begins using his new talents for darker purposes. The indifferent and sometimes distractingly clunky attentions of his camcorder documents disintegrating relationships and eventual chaos.

Audiences never have to wait long for another Nicolas Cage film to hit the theaters; this is the sixth time that American audiences are seeing him on the big screen in the past year. Cage stars alongside January Jones of “Mad Men” fame and Guy Pearce, who recently received critical recognition for his role in the Oscar-winning film “The King’s Speech” as well as in the HBO miniseries “Mildred Pierce.”

Cage plays Will Gerard, whose wife Laura (Jones) is brutally attacked and sexually violated by an unknown man. While waiting at the hospital for an update on her condition, Will is approached by a complete stranger (Pearce) who offers his condolences and then proceeds to tell him about his organization of a few men who help fellow citizens find justice after terrible things happen in their lives.

He offers Will a deal in which he will hire a stranger to seek revenge on the person who attacked Laura, only if Will agrees to return the favor in the future.

As Will gets more and more entangled in this secret organization and the people who run it, he inevitably discovers that not everything is exactly as they seem.

Cage never truly seems to find his mojo in this one, as audiences are once again left to wonder about what has really happened to the famed but now often ridiculed film star’s career. As Saturday Night Live recently said in a parody sketch of the actor: “[He] won an Oscar, that’s [his] mystique.”