Hugh Grant walks the plank with star-studded ‘The Pirates!’ film

Hugh Grant walks the plank with star-studded ‘The Pirates!’ film 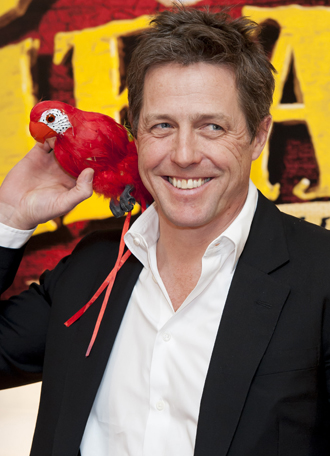 LONDON - Hugh Grant is stepping away from his usual romantic fare - to walk the plank.

The British actor is starring in “The Pirates! In an Adventure with Scientists,’’ his first animated film role. He plays a pirate captain - called Pirate Captain - on a quest to win the Pirate of the Year Award.

He joined co-star David Tennant at the premiere of the latest adventure from Aardman Animations, creators of “Wallace and Gromit,’’ in London on Wednesday.

The “Notting Hill’’ actor admitted he doesn’t see many similarities between himself and his pirate persona.

“I looked at it and I thought ‘Well I’m nothing like that, this is terrible casting.’ So I actually had to adapt myself, and I had to do a bit of acting for once,’’ he joked.

On the red carpet, ex-”Dr. Who’’ star Tennant shared his excitement about being part of a film with such a big English cast:

“It is a bit like being called up for some sort of national service. You think ‘Well, I am serving my country,’?’’ he said. “Clearly that is an exaggeration, but you do feel like in terms of the acting establishment you’re being called out to bat and you don’t want to mess up.’’

“The Pirates! In an Adventure with Scientists’’ opens in the U.K. on Wednesday. The U.S. release date is not yet confirmed. AP