Mixed-race students to get help with school

Mixed-race students to get help with school 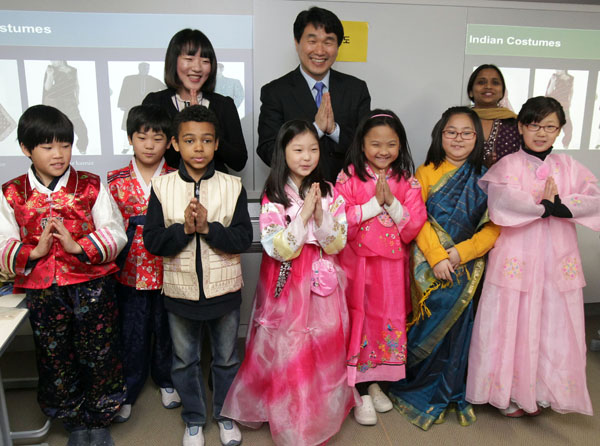 Lee Ju-ho, the minister of education, science and technology, poses with students at Itaewon Elementary School in Yongsan District, central Seoul, last week. Across Korea, the number of mixed-race students increased to 0.55 percent of the total student population as of last year. [JoongAng Ilbo]


Last week, Lee Ju-ho, the minister of education, science and technology, paid a visit to Itaewon Elementary School in Yongsan District, central Seoul, to observe how mixed-race students are adapting to the Korean learning environment.

His visit came after the ministry announced a string of enhanced measures to help mixed-race students settle into Korean schools. The most significant change is an increase in the number of programs designed to prepare mixed-race students for entry into regular elementary, middle and high schools.

“We plan to create an environment in which multicultural students can develop their abilities without discrimination at Korean schools, which will ultimately be good for all students,” Lee said during the school visit.

Currently, there are three preparatory programs for mixed-race students at schools in Seoul, Busan and Gwangju.

The Ministry of Education, Science and Technology plans to expand that number to 26 programs at schools nationwide this year.

The six-month programs aim to prepare mixed-race students for entry into regular schools through courses in Korean language and culture. The ministry’s plan will also add Korean-language classes at elementary, middle and high schools with mixed-race students.

In addition, the number of bilingual instructors will increase to 1,200 from the current 125 by 2015.

Another part of the ministry’s plan addresses peer violence.

Local schools will offer counseling services to mixed-race students who are vulnerable to bullying and will allow them to transfer other schools if necessary without going through complex procedures.

Meanwhile, Korean students will be taught that violence encompasses both violent actions and discriminatory words.

The ministry’s announcement comes as the number of students from multiethnic families continues to rise. In 2007, there were 14,654 mixed-race students attending Korean schools, accounting for merely 0.19 percent of the country’s total student population. Last year, the figure jumped to 38,678 students, taking up 0.55 percent of the total. If the current trend continues, the ministry expects the mixed-race student population to take up more than 1 percent of the total by 2014.

“The growing number of multicultural students should phase in well with our public education system so that they can be raised to become talented members of our society,” an official from the ministry said.

There are lingering concerns, however, that mixed-race students who drop out of school because of the financial or undocumented immigrant status of their parents are being neglected outside of school.

Experts say that several thousand mixed-race students have dropped out of school, pointing to a need for additional measures to protect them as well.