Tariffs drop under FTA with U.S. and first bargains are on the Web

Tariffs drop under FTA with U.S. and first bargains are on the Web 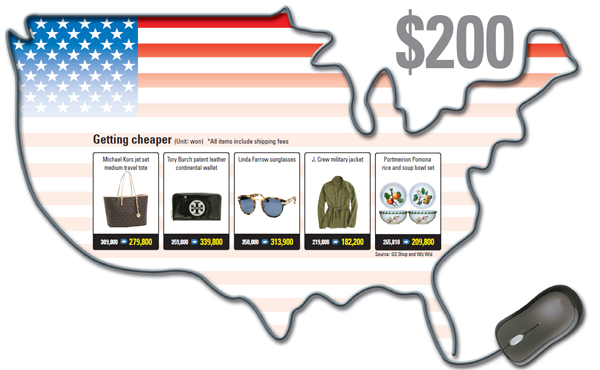 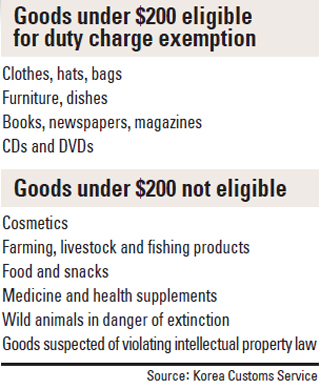 Lee should have waited a few weeks. The Korea-U.S. free trade agreement came into effect March 15, and according to the deal, duties are waived for goods under $200, up from the previous $100. Lee would have saved 24,944 won.

Internet-savvy shoppers are some of the first Koreans to enjoy the savings being ushered in by the FTA with the U.S.

American brands in boutiques and department stores may not get cheaper. Most are manufactured in China or other Asian countries, not the U.S., and brick-and-mortar stores are slower to reduce prices even when import duties fall.

But ordering online through direct-sourcing import malls or U.S. Web sites of branded apparel that ship overseas will give a savings of 13 percent on goods under $200 and 8 percent on miscellaneous goods like shoes, accessories and hats.

The malls have to prove they comply with customs laws to get designated. There are 72 certified malls.

But cosmetics, vitamins, food and medical supplies still have duties.

The Korea Customs Service warned that parcels under $200 in value can be subjected to duties if it has 20 of the same product. The customs service then assumes the products will be resold and not used personally.

On March 16, the Korea Customs Service held a public hearing to explain the new system to online import malls operators.

Before the FTA took effect, GS Shop concentrated on products under $100, which were duty free. Now it’s offering goods up to $200.

“Prices of masstige handbags and branded clothes fall under the new price limit of customs exemption,” said Park Hyeong-min, an official at GS. (Masstige is retail industry jargon for luxury goods offered to the mass market. It combines the concepts of mass market and prestige.)

The number of certified shopping malls fell to 72 from 601 in 2008 because many companies were caught violating the customs laws.

Some online import malls that don’t have designation are lying to customers and saying the FTA hasn’t affected duties.

The customs service said it is considering listing the designated malls on its Web site.